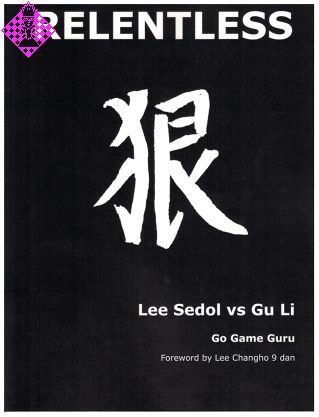 This book contains analysis of 48 games between two of the top Go players of the early 21st century, but it is not just another book of game commentaries. It is the story of the rivalry and friendship between Lee Sedol and Gu Li, their relentless struggle to become the best, and an explication of the secrets of Go hidden within their games.

There are two parts to Relentless. Part One is the core of the book and examines, in unprecedented detail, the 10 game match (jubango) played by Lee Sedol and Gu Li throughout 2014. Part Two reviews every other official game between the two masters (up until the end of 2015), providing the reader with ample material to review and enjoy, while reflecting on what they learned in Part One.

Rather than just saying wh at happened, we use the match as the basis for an extensive study of the fundamental techniques, strategies and principles of Go-all applied within the context of real games, so that the reader can see how ideas and techniques are employed in practice. Go ls an art form, and like other arts, studying the work of masters contributes greatly to one's appreciation, enjoyment and gradual mastery of the craft. When you study a piece of music, the goal is rarely (if ever) just to be able to play it. Rather, a deep study of a piece is intended to convey a visceral understanding of the technique and theory embodied within it, in a way that a book about theory never could.

Relentless strives to offer that same experience to Go players. Over two years, we have distilled our knowledge and passion for the game into 625 pages of pure Go, until nothing more would fit.

Where other books might gloss over the details, we have sought to ex pose the wealth of tactical considerations beneath the surface, so that they may be studied, applied to the reader's games, and eventually mastered. We have extracted a practical lesson from every passage of play and boiled it all down to aseries of memorable proverbs (both old and new) for the reader to internalize.

Relentless also draws on the knowledge of great thinkers of the past-such as Sun Zi (Sun Tzu), Lao Zi, Thucydides, Carl von Clausewitz, and many more-demonstrating how their ideas apply to Go.

Finally, the commentary is honest. In the past, some books portrayed professional Go players like gods and politely overlooked small mistakes. We make no apologies for doing away with this convention.

This is not intended to be the kind of book you will only read once. The content is dense in parts and may require reflection. It is our hope that it will serve readers for many years to come, however worse for wear, as a source of knowledge and inspiration, throughout their journey along the path of Go.

In ancient times there were four arts which educated people sought to master.

They were: music (the zither), baduk (Go), calligraphy and painting.

Among these four arts, baduk is unique in being the only one that requires a partner. No matter how skilled a master is, they cannot create a work of art unless they have a worthy adversary.

This gives baduk a special character, because even though the top players throughout history always competed fiercely to be the best, they also respected one another and often became friends.

Lee Sedol and Gu Li are a perfect ex am ple of this phenomenon. Both players are possessed of an indomitable fighting spirit and a strong desire to climb to the top of the baduk world. Yet, despite the intense rivalry that takes place over the board, they have become good friends through baduk.

Games between Lee Sedol and Gu Li are always dramatic, unpredictable and full of fireworks, and they both have many fans. Their 10 game match in 2014 was much anticipated and was exciting to watch, and the players created a collection of artworks for future generations to enjoy.

The analysis presented in Relentless goes into great detail to explain the strategies and techniques employed by the players throughout this match, and should be of assistance to ambitious Go players in the West.

When you study the games in this book, I recommend that you first play through the game record by yourself and think about the best moves for Black and White using your own mi nd and ideas. Once you've replayed the game, you can read the analysis in this book and compare the authors' ideas with your own.

I hope to see the level of baduk players in the West increase steadily over the coming decades, and that the baduk world will become more internationally competitive and richer as a result.

ix How to Use This Book