From the series »Learn to play Go« 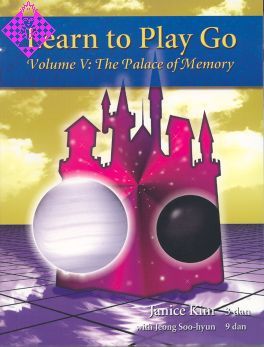 - Templates for fighting in any situation

- Principles of standard sequences, or joseki

- Test Yourself sections check your progress

- Approachable for newbies, invaluable for intermediate and dan-level amateurs

Praise for the learn to play Go series:

"By far the best English-language introduction yet published" - Games Magazine

"For those who want to get strong quickly"-

There are some things we "just know" about Go. Everyone who plays at a certain level knows them. Learning these things doesn't require a huge feat of memory, but an understanding of some principles of the opening and the endgame and of something called, vaguely, "shape".

If you have a grasp of these concepts - and if you can apply them - you have 80% of the skill of a world champion. This sounds impressive, but actually it's not saying that much. In Go, there's a fine line between genius and idiocy. What this knowledge does offer, though, is way to look at a board and see only two or three possibilities, rather than the dozens confronted by a beginning-level player, or the rapidly-exploding probability tree that a computer attempts to crunch.

Advanced players probably have an easier time of it than beginners because when they're trying to decide on a move they automatically discard most possibilities without even thinking about it. One way to do this is to follow shape guidelines. A "checklist" of these guidelines gives you a place to start and often a good hint as to what is going to be the best move.

First of all, what do we mean by "shape"? "Good shape" is an intersection between tactics and strategy. Tactically, you want your stones to act in the most efficient, effective way possible. Strategically, you are trying to surround: after all, the translation of the Chinese word for Go is "the surrounding game."

This may sound cryptic, but you don't have to be from Planet Zen to do it. In fact you would probably do it naturally in a real-life situation. Consider the following example. Imagine a one-square mile of valuable land. Both you and a rival have a claim to it. You could just divide it in half, but instead you agree to draw the border using a test of horsemanship. Each of you has a saddlebag that lets out a small stream of white or black pebbles to mark your border. At high noon both of you take off. If you and your rival are riding neck and neck at furious speed, the right strategy will immediately become obvious:

GET IN FRONT AND CUT 'EM OFF!

Doing this effectively and efficiently is the essence of making good shape. Let's see how this translates into stones on the grid.

As described in Volume II, The Way of the Moving Horse, there are six basic relationships between stones: the stretch, the diagonal, the one-point jump, the knight's move, the two-point jump, and the large knight's move.

These relationships are called haengma in Korean. This word, translated roughly as "the way of the moving horse," shows the Korean emphasis on thinking of a group of stones as a horse moving across the playing field of the board, rather than of each move being an individual unit.

According to this model, a move is decided not so much on its location but on its relationship to previously placed stones. Choosing where you place your stones is akin to choosing between a fast horse and a strong horse. When you put stones right next to each other they are very strong, but they lack speed. Ideally, you want to move as fast as you can without losing strength. In Go terms, this means that you want to surround as much territory as possible without losing connectivity.

In practice, when you are trying to manage a whole board sometimes you'll give up connectivity to gain territory somewhere else. To continue the equine metaphor, this is somewhat akin to letting the wolves bring down a weak horse to gain time for the others.

So it's not just the parts of the horse that have a relationship to one another: the wolves - that is, your opponent's stones - also have a relationship to the horse. They are in fact the same six basic relationships, with of course a whole new and menacing meaning. And, since the relationship between the two stones is now a hostile one, we give them new names. Instead of stretching, we have attaching, and instead of the diagonal, we have the shoulder hit. The one-point jump becomes the one-point approach; the knight's move becomes the knight's-move approach. The two-point jump becomes the two-point approach, and, finally, the large knight's move becomes the large knight's approach.

Most, if not all, of your moves (except for the earliest "sketching" or "outpost" moves in the opening of the game) should be one of these basic shapes. This is your "tool kit" of

As more stones are added and fighting begins, the shapes will crystallize into patterns that [ call the "Templates of Fighting." These are assemblages of seemingly unrelated "good shapes" that I've found constantly recurring in positions between skilled players.

The Templates of Fighting are like forms in the martial arts. Watching a martial arts demonstration, you see how a kind of idealized fight might look if both combatants were fighting in the most effective way. Just mimicking what you see is a good first step to learning how to fight well. Next, as you practice the forms, your muscles "memorize" the moves and how they fit together. In an actual fight, of course, you won't robotically go through the form, but hopefully you won't be just flailing your arms either: you'll use elements of the forms, sometimes modifying them a bit to fit the specific situation.

Now, you could just memorize the Templates and discover on your own how they form the basis of good shape and how they can guide good play. However, I'm going to follow them up with a section covering fourteen specific "Guidelines of Shape." In my case I learned the Guidelines and then much later made up the Templates, but luckily now that I'm writing it all up myself, I can present the proof first and then the pudding.

To construct the Templates of Fighting, I divided fights into categories based on the basic relationship between the stones in conflict, and then into subcategories based on the size of the fighting force. Going back to our menacing wolves, remember that there are six relationships they can have to the horse. The closer the wolves are, the more threatening they become. A stone two points away is actually pretty far off - too distant to be an immediate threat - so the two-point approach and the large knight's-move approach are usually too far away to pick a fight. So, when we build the Templates of Fighting, we are essentially talking about four different relationships: when stones are attached, when they are one point apart, when they are a knight's move apart, and when they are diagonally apart. The subcategories are simple ones of numbers: whether the fight is 1-on-l, 2-on-l, 3-on-l, or 4-on-l. You'll recognize the importance of this classification if you've ever seen a kung fu movie in which the bad guys, one by one, attack the hero and are easily rebuffed. Really, they ought to get together and coordinate their efforts.

004 The templates of fighting

104 5 Enlarge and Protect (or Reduce and Invade)

182 3 How to Calculate the Size of Endgame Moves

202 3 Base Related Moves are Urgent

208 5 Watch the Safety of Your Stones

Edward Lasker, the well-known chess player, once said "If there are aliens, they play Go." Others have gone so far as to postulate that not only do aliens play Go, but that Go itself is a message from the aliens to us. One might wonder in that case what the aliens are trying to say.

So far in my research I've been noticing recurring patterns in Go that I speculate hold the key to the aliens' code. Many of these patterns are documented here for the first time. I've taken the liberty of naming some of them, although this was an agonizing task, as in the case of the "Alien Symbol" (the "Poodle" being a close-running second choice). Throughout the text, "I" refers to Janice Kim, who is fully responsible for errors, omissions, and mistranslations of the extraterrestrial signals I have been receiving. As a way of making the "great pronoun debate" work for us, I've adopted the convention that Black is male and White is female.

Volume IV, the continuation of the Learn to Play Go series, assumes knowledge of basic ideas and terms covered in the first three volumes, including dual life, eyes and eye shapes, basic capturing techniques, haengma or the six basic relationships between stones, basic opening theory, and counting and scoring the game. Knowledge of Go terminology is de-emphasized, although the terms hane, sente, and atari are used frequently and should be familiar to the reader. Key terms to know are in boldface and described within the main body of the text, or in notes below the text when a fuller description would break the flow.

This volume is designed so that any player who has read the first three volumes should have no inordinate difficulty understanding and using the information presented - with the exception of the "Extra for Experts" sections, which may require deeper study to grasp fully. However, I strongly believe that even much more experienced or higher-ranking players can benefit from studying the often-overlooked fundamentals which this book endeavors to cover.

Thanks to my family, Michael J. Simon, Brian D'Amato and the D'Amato family, David Mechner, John Lee, and Barbara London. More thanks to Liz Shura, Valerie Blum, and the extraordinary Jonathan Englander and Bruce Price.