The store will not work correctly in the case when cookies are disabled.
Article Number
SRODZISTD
Author
Roman Dzindzichashvili 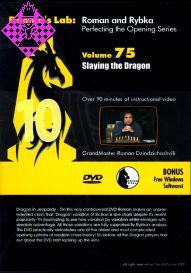 Dragon in Jeopardy - On this very controversial DVD, Roman makes an unprec­edented claim that the "Dragon" variation of Sicilian is in dire straits despite it's resent popularity. It's fascinating to see how variation by variation white emerges with sizeable advantage. All those variations are fully supported by Rybka's analysis. This DVD practically demolishes one of the oldest and most compli­cated opening systems of modern chess theory! So before all the Dragon players find out about this DVD, start racking up the wins.