The store will not work correctly in the case when cookies are disabled.
Article Number
LOKHAOFWATA13
Author
Alexander Khalifman

Opening for White according to Anand - Vol. 13

From the series »Opening for White according to Anand« 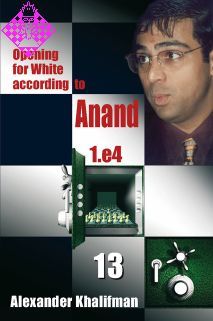 You hold in your hands book 13 of the series "Opening for White According to Anand - 1.e4". This volume is devoted mostly to the English Attack in the Najdorf system, that is the variation beginning with 1.e4 c5 2.Nf3 d6 3.d4 cxd4 4.Nxd4 Nf6 5.Nc3 a6 6.Be3 e6 7.f3 . White's plan is simple and clear in the majority of cases: Qd2, g4, castling long and then a pawn-offensive on the kingside. Naturally, Black cannot be happy following this script and he tries to create counterplay in the centre and on the queenside. There are numerous variations in which he leaves his king in the centre, since castling short early may turn out to be even more dangerous.

The Najdorf system has become the most popular in the Sicilian defence long long ago. Robert Fischer and Garry Kasparov were understandably its most famous exponents. Still, it looks like it will remain tremendously fashionable in the future as well. White began to play the English Attack (that is the plan with Be3+f3+Qd2) regularly during the middle of the 1980ies of the past century, while prior to that, the main theoretical discussions concerned the lines with 6.Bg5 and 6.Bc4. It would be sufficient to mention that in the "Chess Encyclopaedia", edition 1984, only two lines were devoted to it. I would like to point out something without any intention to try to change the already established name of this system. It concerns only its origin. Long ago, during the same year - 1984, some young Leningrad masters like Aseev, Yudasin and Khalifman started trying regularly this sharp and relatively new plan. At first, the Soviet masters were obviously underrated then and secondly the rate of the popularization of information was quite different in comparison to nowadays. Therefore, during the next year, when the British players Short, Nunn and Chandler followed suit, the system acquired its present name - the English Attack almost instantaneously. Meanwhile, there is a line called the Leningrad Variations system in the opening theory, so we better let the sleeping dogs lie.

Starting at that moment, the popularity of the English Attack has only been increasing. Naturally, the evaluations in this system have been constantly changing, just like in every other sharp and fashion able variation, but this exact plan has become White's main weapon against the Najdorf system for many years. It is also worth mentioning that contrary to some other opening variations, which are popular only at the top-level, or only among amateurs, the English Attack is topfashion at all levels.

Having discussed all that, the readers will be probably amazed that we have dealt in the first part of our book with... the Scheveningen variation (1.e4 c5 2.Nf3 d6 3.d4 cxd4 4.Nxd4 Nf6 5.Nc3 e6 ). It is only the senior twin-brother of the Najdorf system, but we have decided that it would be reasonable to analyze this line in this particular volume. The Scheveningen variation used to be considered for a long time as semi-correct, or at least very dangerous for Black, due to the possible Keres Attack (6.g4). Still, the computer monsters of the third millennium proved convincingly that evaluation to have been too optimistic for White. Accordingly, I suggest to you to counter the Scheveningen variation with the same plan Be3+f3+Qd2. In the majority of the cases Black will have to play the standard \u1072?7-\u1072?6 move, so typical for most of the Sicilian set-ups, so at the end there would arise a transposition to the English Attack. In case Black tries to save that tempo for something more useful, then as a rule, he usually tries to prepare the pawn-advance d6-d5 in some lines. He fails to equalize in that fashion however, if White plays precisely.

The second part of our book begins with the analysis of some seldom played moves for Black in the Najdorf system after 6.Be3. It would be reasonable to add that we do not consider 6...Ng4 and 6...\u1077?5 (together with the main line 6...e6) as rarely played and we will deal with them in the last volume 14 of our series. It should be mentioned that after 6...Nc6 7.f3 d5, Black succeeds in simplifying the position considerably and minimizing the danger of coming under a direct attack. In that case however, he suffers great positional pressing without any real counterplay, so this is hardly his best choice. We have also analyzed variations of the English Attack in which Black develops his knight to c6. In that case, the developments are rather similar to the Rauzer Attack, since White often retreats with his bishop from g5 to e3 after h7-h6. Accordingly, here most of the fine points depend on whether this move, present or absent, would be useful or harmful in every particular position. Presently, the system with the development of Black's knight on c6 is in a crisis. The last attempts for its rehabilitation, made at the beginning of this century by some players and among them Kramnik 8 and Gelfand, were not successful, since White's attack proved to be faster in most of the critical variations.

Finally, in the third part of our book, we have analyzed the main lines of the English Attack arising after 6.Be3 e6 7.f3 b5 . This is exactly where the main theoretical disputes are taking place nowadays, moreover that we can even say that the correctness of the Najdorf system and maybe even the entire Sicilian Defence hinges on the evaluation of this particular variation. Black is trying to exploit the fact that White's set-up in the centre is built a bit too slow and he tries to obtain an immediate counterplay in the centre and on the queenside even before completing his development. Black's king remains quite often in the centre for long in this variation in the majority of cases. This is not only due to the fact that the g8-square may be even more dangerous for Black's monarch than the e8-square, but also because castling is a loss of tempo in a way and he can use it for the creation of concrete threats. White must play very energetically in practically all sub-variations and he should be ready to part with material if necessary. He has sacrificed so many knights on the e6-square in this variation that we have even lost count. We hope this book will help you to play beautiful combinations and games and may they be not only spectacular but effective as well.