Attributes
Out of Production
€24.95
Incl. 16% Tax, excl. Shipping Cost
Add to Wish List
Skip to the end of the images gallery 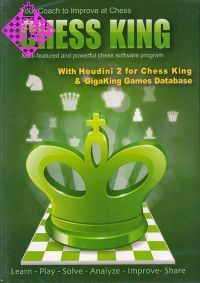 Chess King 2 with Houdini 2 is the new June 2013 version of the top selling Chess King chess software that was introduced at the end of 2011.

Chess King 2 is now as easy-to-use and as powerful than ever, includes more games and puzzles, and is powered by the super grandmaster engine Houdini 2.

Chess King 2 is a new and versatile tool for chess players and is an ideal introduction for the beginner, a challenging opponent for the practiced amateur, and an invaluable coach for the aspiring master.

Chess King emphasizes simplicity of use in training players. However, it is more than just a traditional training program as it includes an extremely strong chess engine and a huge professional database. It is also a convenient tool for analyzing and studying one's opponent before facing them at a tournament.

Buying Chess King 2 is like getting several products and paying only for one, a professional chess software system, the largest game database available GigaKing, the super grandmaster chess engine Houdini 2, 1500 chess puzzles for all chess levels, a unique random playing mode, and much, much more. Included: Houdini 2, GigaKing Database, Full opening tree, Chess puzzles, over one hundred opening positions, Photos of over 1600 chess players. Houdini 2 - a chess engine rated well above 3000 Elo is an excellent choice for analysis.

Considering such a strong engine can be frustrating to play against, Houdini 2 includes various kinds of handicaps that can be set up using the Chess King interface.

The version of Houdini 2 that comes with Chess King is a single processor one. GigaKing Database contains over five million chess games. This database includes games from the 16th century up to April 2013. Full opening tree is a statistics database of positions in the GigaKing database. The program is very easy to use, with over 20 video tutorials available on the publisher's site and a possibility to send questions and feedback to the manufacturers. More features than programs costing many times more.