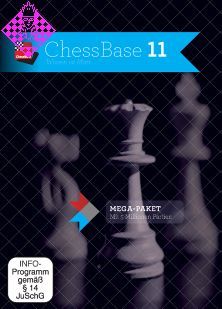 From now on purchaser of a CB 11 Premium package will receive free of charge:

Start your personal success story with ChessBase and enjoy your chess even more. Let ChessBase11 show you which variations are really being played nowadays. Find your next opponent's weak points and exploit the advantage of well targeted preparation. Spice up your repertoire with new tricks and traps.

With ChessBase 11 chess becomes even more fascinating and all the more exciting. In the new ChessBase 11 program the Microsoft Office based interface ensures the key information quickly appears on screen. The new function "Fashionable Variation" kills two birds with one stone: ChessBase 11 shows you which continuation is currently fashionable. Frequently this is not the sequence commonly played until recent, sometimes these new lines kick off very early on. For example, in the Queen's Gambit, 2 ... c6 is now clearly the main move and has taken over from the traditional 2 ... e6. Your opening preparation should not be hampered by studying old or amateur games. For that reason, ChessBase 11 places the latest games between the strongest players at the top of the games list. When you prepare for a specific opponent, you can see at a glance what he is playing at present and when he modified his repertoire. ChessBase 11 offers you access in seconds (DSL) to the ChessBase online database with over 5 million games from the dawn of chess history right up until the latest top tournament. The commentary function "Theoretical Innovation" will rapidly and reliably show you where the players entered new territory and it will also add reference games. And best of all: your database will always remain up-to-date. Both the ChessBase online database and also the database received with your package (Big or Mega) will be regularly and automatically kept bang up to date .

Other innovations in ChessBase 11: