The store will not work correctly in the case when cookies are disabled.
Article Number
LOFLECFBATRL
Author
Glenn FlearMilos Pavlovic 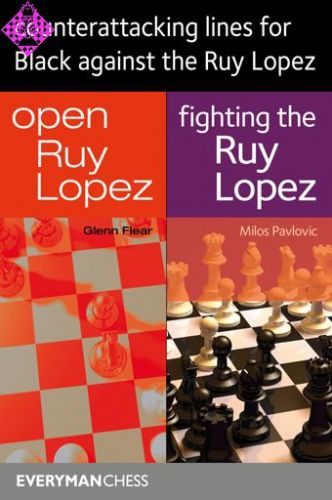 Two great books from the Everyman Chess Library, Fighting the Ruy Lopez by Milos Pavlovic and Open Ruy Lopez by Glenn Flear, brought together in one volume.

The Ruy Lopez is a hugely popular opening, and anyone who plays 1 e4 e5 as Black needs to have a reliable answer ready. This book provides a solution.

Drawing upon his years of experience facing the Lopez, Grandmaster Milos Pavlovic devises a sound yet ambitious repertoire for Black based on the legendary Marshall Attack. The Marshall is a perfect counter-attacking weapon, as it avoids passive positions and the so-called 'Spanish torture'. Furthermore, Black's tactical and positional goals are usually clear-cut and often involve a direct attack against White's king. The effectiveness of the Marshall is clear if you consider that the last two world champions have both suffered crushing defeats on the white side (Kramnik vs Leko, Brissago 2004; Anand vs Aronian, Morelia 2008) whilst Garry Kasparov always avoided it with White.

The Open Ruy Lopez (also known as the Open Spanish) has always been a popular choice at both club level and at grandmaster level, where it has withstood the test of time after decades of close scrutiny. It offers both sides the opportunity for a sharp clash of forces in which the better prepared player will often come out on top. It is therefore no surprise that fighting players such as Victor Korchnoi and Jan Timman have always used the Open Ruy Lopez as an important weapon in their armoury.