Attributes
Out of Production
€99.90
Incl. 16% Tax, excl. Shipping Cost
Add to Wish List
Skip to the end of the images gallery 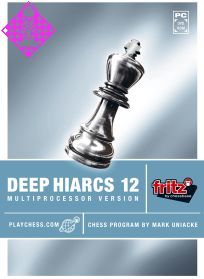 For nearly 20 years HIARCS has been among the very best chess programs in the world. Ever since its first World Championship success in 1991 HIARCS has maintained its position as one of the world’s premier chess playing programs. As recently as December 2007 HIARCS further enhanced its reputation by winning the International Paderborn Computer Chess Championship in Germany ahead of a world class field. HIARCS is famous for its human-like playing style and its ability to come up with the unexpected.

Recent HIARCS versions are renowned for sharp attacking chess and a never say die attitude to their play. In HIARCS 12 this playing style has been positively enhanced through a new deeper search and evaluation of dynamic possibilities. It is capable of building deep attacking positions against the enemy king and executing exciting mating attacks. This new approach enables HIARCS to play interesting, distinctive aggressive chess while being sensitive to the needs of the position. This has improved HIARCS in all phases of the game and even in quieter positions HIARCS 12 is able to be more selective about the variations it explores to achieve a better understanding than previous versions leading to much stronger play. As an analysis partner HIARCS is second to none with its ability to learn from the positions it analyses and plays. This is an essential feature for all chess players interested in analysing games, studies, positions and particularly the opening as it guides HIARCS into a greater understanding of chess positions and their possibilities than ever before. For many years top chess players have used HIARCS as an important analysis partner for

This combination of strength, playing style and learning makes HIARCS 12 ideal for all players looking for an intelligent chess partner that learns and improves with you.

A new super strong HIARCS 12 openings book is also included which has been dramatically enhanced with the latest cutting edge chess theory and a wealth of novelties to provide a huge repertoire of finely tuned variations.

For HIARCS fans and engine collectors the Championship winning HIARCS Paderborn 2007 engine is also included. Deep HIARCS 12 is the ultimate multi-core/multiprocessor HIARCS chess engine capable of utilising up to 8 CPU cores simultaneously. This results in much faster analysis and playing strength depending on your hardware e.g. on Dual-Core hardware Deep HIARCS 12 runs nearly twice as fast as on a single core processor. Deep HIARCS 12 even works on single core processor systems so you can use it today in the knowledge it can grow with your new hardware to future proof your purchase decision.

THIS IS WHAT HIARCS 12 OFFERS:

The database on the DVD has more than 1,1 Millions of games, the latest of them played autumn 2006.