The store will not work correctly in the case when cookies are disabled.
Article Number
LXMCDGGBCL1
Author
Neil McDonaldColin Crouch 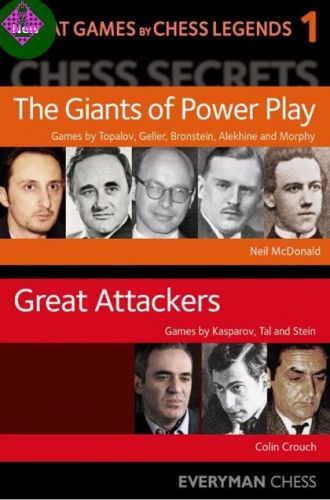 In The Giants of Power Play, Neil McDonald selects five players who have excelled in the field of 'power play' - the art of putting opponents under constant pressure. McDonald examines the contributions made by each player, their differences in approach and style, and from Morphy to Topalov, how they followed in each other's footsteps.

The chess world has witnessed a great number of wonderfully gifted attacking players, geniuses who have dazzled the chess public with their brilliant masterpieces.

Everyone has their own favourites, and in Chess Secrets: Great Attackers, Colin Crouch chooses three of his own: Garry Kasparov, Mikhail Tal and Leonid Stein. World Champions Kasparov and Tal need no introduction, while Stein was a highly creative and intuitive player with the ability to destroy the world's best players with his vicious attacks.

The Giants of Power Play:

035 2 Catching the King in the Centre

292 9 The Psychology of Preparation