The store will not work correctly in the case when cookies are disabled.
Article Number
LXPRIGGBCL2
Author
Craig PritchettNeil McDonald 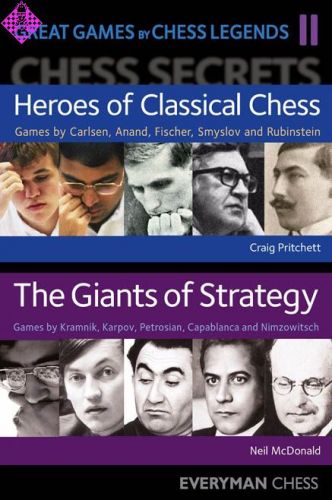 In Heroes of Classical Chess , Craig Pritchett selects five great players whose style exemplifies classically direct, clear, energetic, tough, ambitious yet fundamentally correct chess playing attributes. Pritchett studies the major contributions they have made, compares their differing styles and discusses the critical influences they have had on the development of chess, on their peers and on all our games.

The chess world has been blessed with some wonderful strategists, innovators of the game with their instructive play and profound teachings. In The Giants of Strategy , Neil McDonald chooses his selection of the most prominent ones and highlights the major contributions they have made. He examines their differing approaches and styles, and from Nimzowitsch to Kramnik, how they followed in each other's footsteps. A careful study of this book will help you to understand and improve in one of the most crucial elements of the game.

The Giants of Strategy