The store will not work correctly in the case when cookies are disabled.
Article Number
LGISHITB/EG01
Author
Ikuro Ishigure

From the series »Elementary Go Series« 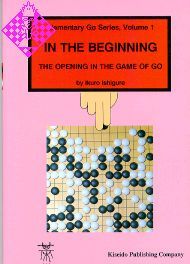 The world's foremost intellectual board game begins with virtually unlimited possibilities on an empty board. Here a 9-dan professional go player explains how the game takes shape, bringing correct modern opening technique within the reach of all players. Elementary in its approach, IN THE BEGINNING illuminates depths of go strategy that few amateurs understand well.

Required for all go players.

The opening is theoretically the hardest part of the game of go. To professional players, it is the hardest part in practice, as well; in championship games that last two days, for instance, the first day is usually spent playing about the first fifty moves, and the second day is spent finishing all the rest. Such is the consistency of professional play in the middle game and endgame that if a player comes out of the opening with a bad position, it is almost impossible for him to catch up. Amateurs sometimes rush through their initial moves, saving their powers for the fighting later, but this is more an indication that they do not understand the opening than a sign of talent.

The number of possibilities in any opening position is so vast that a player must rely on his feeling for the game, rather than on rigorous analysis, for guidance. Here he has the greatest chance to use his imagination, play creatively, and develop a personal style. This is the one phase of go that has shown any significant evolution during the past few centuries, and it still defies absolute comprehension.

No book can develop a person's imagination or personal style, and this one does not make the attempt. In a sense, therefore, it is very incomplete: the reader will not find a prescription for every situation, and in actual play he will have to make his own choices most of the time. What we have tried to give him is a basis to start from: some sound moves, some useful ideas, some good examples. If we have succeeded, the following pages will help him to increase both his skill at and enjoyment of the game.