The store will not work correctly in the case when cookies are disabled.
Article Number
SRXKARKBG2
Author
Anatoly KarpovRon Henley 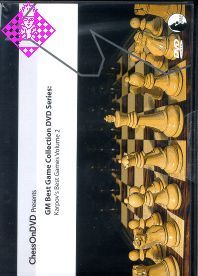 In the second volume of a series of chess videos devoted to his best games, the 12th World Champion GM Anatoly Karpov discusses and analyzes four of his best tournament games of recent times - those against Andras Adorjan (Lucerne 1989), Artur Yusupov (USSR Ch. 1988), Garry Kasparov (Belfort 1988), and Gyula Sax (Linares 1983).

This dvd (and others in the series) provide the viewer with a unique perspective on the thought processes of a World Chess Champion.