The store will not work correctly in the case when cookies are disabled.
Article Number
LXRENNHASK
Author
Fabrizio ZavatarelliHans Renette 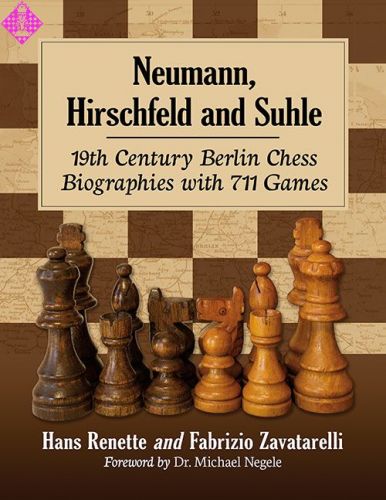 Around 1860 a wave of talented youth intensified the Berlin chess scene. Within a short time Berthold Suhle, Philipp Hirschfeld and Gustav Neumann ranked among the best players in the world. After a few years, Suhle went on to become an authority in ancient Greek, and Hirschfeld proved a successful businessman (while remaining a sparring partner of Johannes Hermann Zukertort). Neumann retained a fascination for the game and grew into one of the world’s strongest players.

Despite their achievements little has been known about their lives and games. Drawing on a range of sources, the authors fill this gap, providing games with both old and new analyses. An introductory chapter on Berlin chess before 1860 and an appendix on Bernhard von Guretzky-Cornitz complete the book.