The store will not work correctly in the case when cookies are disabled.
Article Number
LZNICM202006
Author
Jan TimmanDirk Jan ten Geuzendam 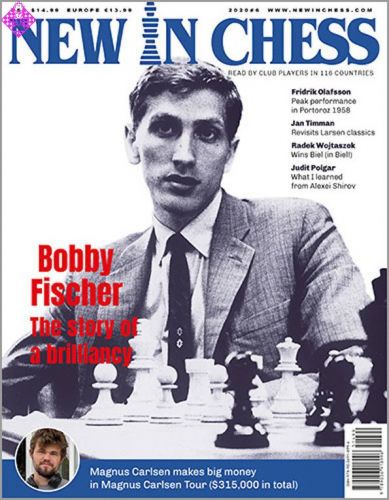 Skip to the beginning of the images gallery
Details
Content

In times of lockdown even tigers take to chess in Moscow.

Deep Purple’s Ian Gillan believes that no one should run for political office who cannot prove that they are member of a chess club.

The Grand Final of the Magnus Carlsen Tour culminated in the hoped-for clashbetween online rivals Magnus Carlsen and Hikaru Nakamura. At the end of a 38-game marathon, the World Champion prevailed with a draw in the last Armageddon game.

26 Bobby and the cheese sandwich

Bolstered by Switzerland’s handling of the Covid-19 pandemic, the Biel organizers decided to have their annual chess tournament where they always had it. ‘After so many months it was simply pure joy to sit at the board and execute moves.’

A fine choice of legends added spice to the final leg of the Magnus Carlsen Chess Tour. Nevertheless the big hero was Carlsen himself (again), as he swept the field, winning all his matches.

‘He was a great chess player on the ground and he had all the pieces.’ Who said this about the great Michael Jordan?

Not one to pull punches herself, Judit Polgar had an easy task selecting encounters with ‘the other magician from Riga’ that saw sparks fly.

Our book reviewer is not only impressed by Emanuel Lasker’s boundless energy and creativity, but also by the second volume of the revelatory new biography of the German giant (five stars!).

97 They Are the Champions

Sasa Martinovic is the national champion of Croatia.

Which three people would Danny Rensch like to invite to dinner?

More from New in Chess