The store will not work correctly in the case when cookies are disabled.
Article Number
SCOSHIMBGITPD
Author
Alexei Shirov

Shirov, My Best Games in the Petroff Defence 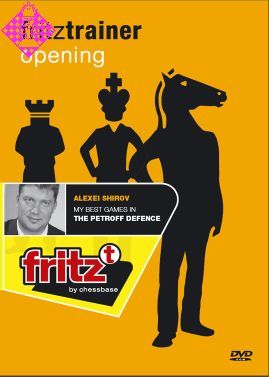 With this DVD on the Russian Defence (Petroff Defence) Alexei Shirov continues the successful and highly praised series of his best games. Since many players look on the Russian Defence with the suspicion that it is a drawish opening, and one which at the same time is both dry and boring, Shirov has in this DVD set himself the specific task of countering this view of matters. Thus he begins the DVD with a game featuring the Cochrane Gambit. Then of course Shirov concentrates on the solid and recognized lines, and in doing so continually manages to explain their deeper content. But the spectator will draw benefit not only from his remarks on the opening, because Shirov understands so brilliantly how to explain instructively and profi tably for the student every phase of the game, with the result that at the end of the DVD on the Russian Defence, you will even have learned a lot about endgames. Video running time: over 5 hours.

Alexej Shirov was born in Riga just like world champion Mihail Tal, and also his playing style reminds many chess fans of the young Tal. In the beginning of the 90ies, a comet-like rise brought the young Latvian to the world top within the shortest of time. Being no older than 22 years, he already had an Elo rating of nearly 2750 and belonged to the absolute elite. Since then Shirov has been one of the best players in the world, delighting all chess fans with original and amazing ideas on the board.

Alexei Shirov is an enormously talented and creative player who managed to reach the 2700 level before the age of 20!

In his latest Fritztrainer opening DVD he likes to invite the reader to the Petroff or Russian defence. Alexei Shirov is a great admirer of the player Petroff and compares him on this DVD with other great players as for example the brilliant Paul Morphy! But it was the famous English master Howard Staunton who named it the Russian defence in his famous book The Chess Player's Handbook. The Petroff has a reputation of being a boring opening but when you play throw these five hours of multimedia files from the great Shirov you shall be impressed by the hidden possibilities of this interesting defence. Exciting is for example game one from this DVD where Shirov discusses his game with Nigel Short,Dubai blitz 2002, where white went for the knight sacrifice of the great attacking genius Vitolins 1.e4 e5 2.Nf3 Nf6 3.Nxe5 d6 4.Nxf7!? When you play throw this game you will understand that Alexei Shirov never played the move 4.Nxf7!? and probably never will,even that there where moments in the game where white was better. Shirov did take up some ideas from Vitolins but not his pet line with 4.Nxf7!?,even that he is very impressed about the great tactical skills from his college and landsman Vitolins. There are 14 games on this DVD where Shirov has the white or black pieces, exactly counted nine with white and four with black. Included is one of his most remarkable games Shirov - Timman,Wijk aan Zee 1998. So this is also an excellent DVD for all players who are searching for a white answer against the Petroff defence!