The store will not work correctly in the case when cookies are disabled.
Article Number
LOKARTCKDCV
Author
Anatoly KarpovMikhail Podgaets 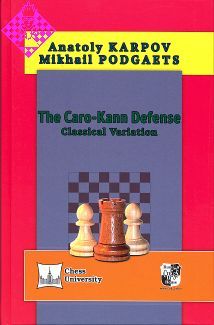 For more than thirty years Anatoly Karpov has been wholly committed to the Classical Variation of the Caro-Kann at top tournaments, including world championship matches. It goes without saying that many successful opening novelties employed by the venerable world chess champion are the result of painstaking work performed by him and his seconds. One of his assistants, Mikhail Podgaets, was the leading specialist on the Caro-Kann. For many years Karpov and Podgaets held their findings in strict secrecy. Only now has the time come to shed a ray of light on their thorough research.

This publication focuses on the currently most popular system of the Caro-Kann (1. e4 c6 2. d4 d5 3. Nc3 de 4. Ne4 Bf5). Once you crack open this book you'll explore the path taken by Karpov and Podgaets, step by step, move by move. This is the path of groundbreaking discoveries and stunning victories.