The store will not work correctly in the case when cookies are disabled.
Article Number
SCOBOLTKI
Author
Victor Bologan 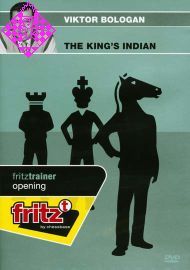 The King's Indian is one of the most interesting and aggressive defences Black can choose. The World Champions Robert James Fischer and Garry Kasparov used to play this openingoften and with great success, and also today's word-class players are employing it frequently, like for instance Boris Gelfand, Alexei Shirov and Teimour Radjabov.

On this DVD, Viktor Bologan (Elo 2690) presents a complete King's Indian repertoire for Black. In 21 chapters the Grandmaster deals with all possible white reactions, showing the subtleties in main and side variations. The DVD is suitable for both the beginning and the advanced King's Indian adherent.

Bologan's explanations are based on his own experience and analyses. Yet the top player knows only too well to who he owes his successes: Grandmaster Zigurds Lanka, who once taught young Viktor the King's Indian and thus helped him to become a Grandmaster - since according to Bologan, the necessary norms were achieved... of course with the King's Indian!

Viktor Bologan is a pupil of the top Moldavan trainer Vecheslav Chebanenko. For many years Bologan has been the number 1 in Moldava and has represented his country in eight chess Olympiads. His greatest successes were in 2003, when he first of all won the Aeroflot Open and then the famous Dortmund Tournament, ahead of Kramnik andAnand. The Moldovan has extensive experience as a trainer and has also published his first books.