The store will not work correctly in the case when cookies are disabled.
Article Number
LOSCMTSWTG
Author
Marcus Schmücker 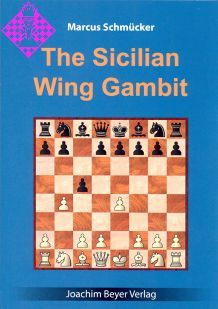 In his book about the Sicilian Wing Gambit (1.e4 c5 2.b4 cxb4 3.a3) Marcus Schmücker takes a closer look at a very interesting opening, which for a long time has been regarded as a daredevil's approach or, at best, as an exotic option to avoid the enormous theoretical material of the Sicilian Defence. As a matter of fact, the idea of this gambit is quite serious. By eliminating Black's c-pawn and ensuring a swift development of his queen side, White wants to obtain positional compensation for the sacrificed pawn.

The author concentrates on the best answer 3 ... d5, which enables Black to prevent his opponent from building a strong center with pawns on e4 and d4. The often ensuing sharp tactical skirmishes in most cases fill white spots on the theoretical rnaps. White has good chances to obtain advantage early on, which can even lead to a quick win if the opponent is completely unprepared.

Of course, it's not to be expected that the Sicilian Wing Gambit will be used more often in GM tournaments from now on. But maybe the book can encourage more main stream players to include this neglected but serious anti-Sicilian weapon in their opening repertoire. Whether the popularity of this gambit will grow depends, however, on its success in practical games.

It's the author's intention to treat all alternatives of the 'standard move' 3 ... d5 in a second volume.

007 The Structure of this Book