The store will not work correctly in the case when cookies are disabled.
Article Number
LXGILTOU1916
Author
Anthony J. Gillam 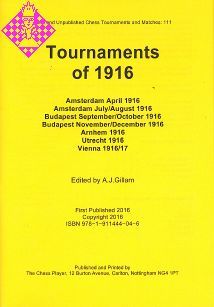 Europe was in the depths of World War 1 in 1916, so the amount of chess being played, even at the top levels, was very small. Three tournaments from that year have been published:

This book contains all of the traceable games from every other significant tournament of that year.

7 cross tables; over 40 diagrams; nearly 100 games and position, with notes where available; background information; several of these tournaments are rare and their cross tables do not appear in the published reference books