The store will not work correctly in the case when cookies are disabled.
Article Number
LXKEEWWTS
Author
Raymond KeeneNathan DivinskyJeff Sonas

Who Was The Strongest ? 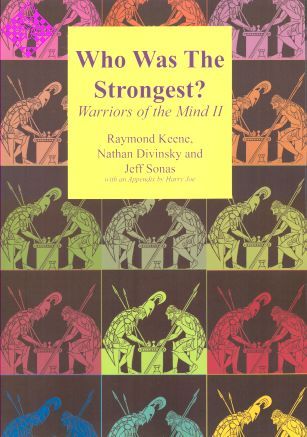 All chess enthusiasts are fascinated by the question of Who is the strongest of all time? Here two respected chess statisticians and a noted chess grandmaster come together to provide an answer, each one attacking the problem from his own perspective, but each one also coming up with the same unavoidable response!

One can argue endlessly about preferences, but when such preferences backed up by the informed opinion of readers of The Times, as well as exhaustive results between the elite and a close examination of tournament and match charts - all point in the same direction, then it is difficult to dispute the outcome.

In the course of this fascinating and scholarly journey, the reader encounters all the greats of chess, from Staunton via Steinitz to Lasker, Capablanca, Alekhine, Botvinnik, Fischer, Karpov and Kasparov. Each contender is provided with a thumbnail cv and extracts from their most significant encounters.

This book is the companion volume to Warriors of the Mind, an earlier attempt to determine the top chessplayers of all time.

Now, after a gap of almost two decades, we revisit the same territory, but joined by a third Musketeer, statistician Jeff Sonas of Chessmetrics fame.

There are three big differences in the new book:

1. Professor Divinsky has considerably expanded the list of Candidates whose careers we examine and whose results have been thrown into the statistical pot; his cut-off point was the new millennium;

2. Jeff Sonas has been invited to contribute his own conclusions as to the all-time greatest, based on alternative methods and considerable statistical evidence which he has accumulated; Jeffs figures extend right up to the moment of Kasparov's retirement in 2005;

3. Ultimately it is public opinion which judges achievement. No amount of lies, damn lies or statistics will convince the fans that "B" is the greatest, when they are firmly of the opinion that the accolade belongs to "A". For this reason I have added the results of a reader poll I conducted for The Times, thus adding the element of vox populi, or informed public opinion.

It is a tribute to the overwhelming performance of the ultimate champion of Champions, that all three very different methods of assessment unanimously hit on the same name!

In conclusion, all three authors would like to thank Peter Stockhausen, Professor Harry Joe and Dr Dave Regis, for their invaluable contributions in collation, statistical formulation and typesetting, all of them vital in getting this mammoth labour into print.

009 PART ONE: THE DIVINSKY DETERMINATION by Nathan Divinsky and Ray Keene

386 APPENDIX 3: The Mathematics Of Chess Results