The store will not work correctly in the case when cookies are disabled.
Artikelnummer
LXALENY1927
Autor
Alexander Alekhine 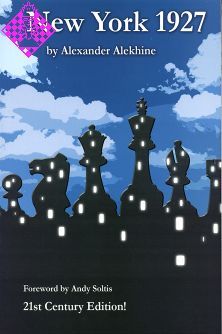 For decades, Alexander Alekhine's account of New York 1927 was at the top of the list of works that should have been rendered into English but unaccountably were not.

This is unlike any other tournament book ever written. Not only do you have one of the greatest annotators of all time rendering some brilliant analysis, but he melds it with an exceptional agenda, an anti-Capablanca agenda. And since he wrote it after defeating Capablanca in their marathon match, he sounds like a sore loser who became a sore winner.

So, this is just a mean-spirited book, right? Nothing of the sort. Alekhine goes beyond elaborate move analysis and offers deep positional insights and psychological observations. Nikolai Grigoriev, in his foreword to the 1930 Russian edition of this book, pointed out how Alekhine broke new ground by underlining the critical moments of each game.

Why Alekhine's work was published in German, in Berlin in 1928, and not in English, is unclear. But now, after more than 80 years, it's finally available to the largest audience of chessplayers. It's about time.