The store will not work correctly in the case when cookies are disabled.
Artikelnummer
SCASHWGDS02
Autor
Maurice Ashley 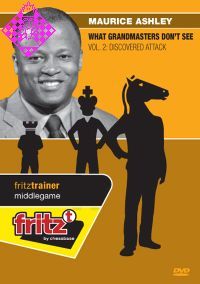 Many times, when a top player blunders, it is routinely described by the esoteric term "chess blindness". In this series What Grandmasters Don't See, chess trainer and worldclass commentator Maurice Ashley strips away the myth and for the first time explains why the root of these mistakes is more often based in the psychology of human learning. In this DVD, Volume 2 of the three part series, Ashley shows that no other standard tactical theme is more over-rated, overlooked and misunderstood than the Discovered Attack. In each example, Ashley illustrates how often players are confused by discovered attacks because the examples in the majority of chess books are poorly chosen to show how this important tactical idea really works in most practical games. In the first half of the DVD, Ashley uses interesting and entertaining positions to explain the points in his trademark effervescent style. The second half of the DVD is filled with examples to test what you have learned about discovered attacks, with a series of exercises of increasing difficulty. The material is drawn both from classic and from recent games.

is an International Grandmaster well known for his dynamic brand of chess commentary and effective coaching style. He was a commentator for the Anand-Kasparov World Championship match as well as all of Kasparov's epic computer matches.