The store will not work correctly in the case when cookies are disabled.
Artikelnummer
LXCROWWLAC
Autor
Colin Crouch

Why we lose at chess 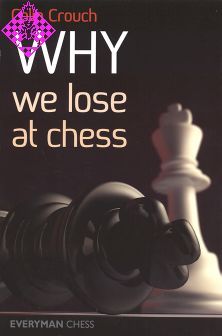 The main reason we lose at chess is no great secret: we all make unnecessary mistakes! However, simply acknowledging this fact won't be enough to help us improve. The key question is how can we eliminate, or at least keep to a minimum, the worst mistakes from our play - those which really cost us vital points?

In this book Colin Crouch tackles this important subject head on. Drawing on his vast experience of tournament play, he analyses critical moments from his games where mistakes occurred and examines how to recognize the danger signals and thus improve decision-making. The reader is challenged by 60 carefully-planned exercises - providing perfect tactical training for real over-the-board battles.

Dr Colin Crouch is an International Master, a tremendously experienced tournament player and a highly regarded chess writer. His previous books for Everyman Chess include Queens Gambit Declined: 5 Bf4!, which has been highly acclaimed for its thoroughness and originality, with one reviewer describing it as "the opening book of the year".

While writing up reports for various magazines, I have been thinking about the idea of 'ordinary chess', of games which are not technically perfect, but may still be of interest to players, spectators, and hopefully to readers. For this to work well, the writer has to take the annotations seriously. The idea is that while the game is interesting anyway, just think of what spectacular ideas might have been thought of if the player could have found the occasional improvement. Often in chess, bril­liancy is just around the corner.

I have used a similar perspective in this book, but with a different, almost op­posite perspective. I am writing up 'ordinary games', my own, with the thought of systematically going through them, spotting any mistakes of my own (and there are several), and finding better moves. I am aiming to find ways of cutting out mistakes, thereby improving both my play and that of the reader.

Many games have been played in local and national league events, and I dedi­cate this book to those who continue to keep chess clubs going, in what is often quite a difficult time. These days I am cautious about playing in long tourna­ments, and also quickplay tournaments, sometimes travelling from one end of Britain to the other. It is good to play in my local club, Harrow, where there are often fifty chess players in a single evening, sometimes close to sixty if there are visiting teams. My thanks to colleagues.