The store will not work correctly in the case when cookies are disabled.
Article Number
SCODAVABPOS
Author
Nigel Davies 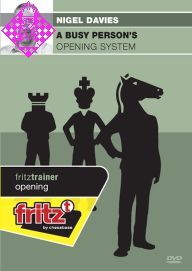 Players with interests and commitments away from the chess board often find it difficult to compete against those with more study time. Their opponents come to the board armedwith the latest theory and can bash out moves well into the middle game. Onthis DVD Nigel Davies addresses this issue by demonstrating a simple and easy to learn opening system designed for the busy person. His recommendation ofadopting a structure with ...d7-d6, ...c7-c6 and later ...e7-e5 as Black and d2-d3, c2-c3 and e2-e4 as White will enable you to sidestep book lines and reach a middle game position in which native ability is more important. This approach has many advantages, not least of which is that players who have come to rely on memory can play very badly when are no longer able to use it. The strategies presented here can also help develop positional understanding and provide important insights into similar openings such as the King’s Indian Defence.

Nigel Davies has been an International Grandmaster since 1993 and is a former British Open Quickplay and U21 Champion. He has played the lines presented here in his own games and worked extensively as a chess coach.