The store will not work correctly in the case when cookies are disabled.
Article Number
LZACBV02
Author
Hartwig CasselHermann Helms 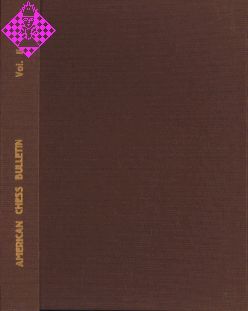 The second Volume is enlivened by a long supplement on the Rice Gambit (a hotly-debated line in the King's Gambit around the turn of the century) and a 26 page supplement of fiction on a chess theme by Benjamin Marshall M.D. (no relation of Frank). Matches included Marshall - Tarrasch and the annual Anglo-American cable event.

The American Chess Bulletin of beloved memory was a New York publication which grew out of Marshall's success at Cambridge Springs 1904. Edited and published by Hartwig Cassel and Herman Helms, it was a definitive journal of record for USA and European events. Now - providing a great historical service to chess fans everywhere - Publishing House Moravian Chess have reissued this great series in stoutly bound hardback volumes, bringing back to life the essence of the turn-of-the-century chess scene. Each issue is packed to the brim with top-quality games, analysis and tournament reports, as well as fascinating background material and witty anecdotes which really captured the spirit of the times. A collector's dream!