The store will not work correctly in the case when cookies are disabled.
Article Number
LGKIM21STCNO2
Author
Sung-Rae Kim 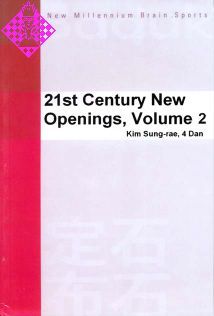 There is a Baduk proverb: "Josekis are not for memorizing, but for forgetting." The point is not to memorize the order of the moves, but to understand the meaning of each move in a joseki. This is what Volume 2 of 21st Century New Openings does. In its 14 chapters, many of the modern josekis are analyzed in detail with emphasis on the reasons the crucial moves are made.

This book is divided into three parts; the first part is joseki, the second on joseki and its relationship to the fuseki, and the third a summary of the new patterns that are currently played by professionals in the beginning of the game. Every pattern is shown as it occurred in some recent professional game, so as to help the reader understand it more easily. Anyone who plays Baduk can understand this book, but it is especially recommended to those hoping to become professional players.