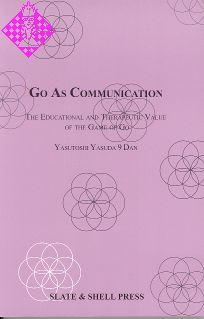 Go as Communication is the record of a surprising discovery, namely, that a simple game can have enormous educational and therapeutic value.

Yasutoshi Yasuda, the person responsible for this discovery, is a Japanese professional player. Concerned about social problems in Japanese schools, Yasuda began introducing the game to school children and discovered to his surprise that it had immediate positive effects. His experiences with school children encouraged Yasuda to expand his efforts to homes for the elderly and then to institutions for the mentally and physically handicapped. In every case, the game had a tremendous positive impact.

The version of the game that is used in these programs is quite easy to learn, and it is easy to make playing equipment. The book provides thorough practical guidance for both teaching thr game and creating playing sets.

There is no impediment for anyone who finds Yasuda's program as appealing -and inspiring- as I and many other people do. The rewards are immediate and obvious. Scores of people around the world have introduced the capture game to thousands of people of all ages with very satisfying results. Yasuda's program offers everyone an opportunity to make a positive difference.

"You are a senile old man; you've forgotten to use your walking stick!"

We were playing a game of Go with the members of two teams taking turns placing a stone on the board at a day care center for the elderly. Suddenly, a man who had seemed able to walk only with the aid of a walking stick, stood up and walked toward me. He was so absorbed in playing Go, he had forgotten about his cane!

It is often said that people are losing heart nowadays. Am I the only one who feels that people, children and adults alike, look tired? I wanted to do something to help this situation, and a number of years ago I embarked on a plan of popularizing Go in the hope that I, as a professional Go player, could do something to help change society.

During the years since then, I have visited educational institutions, including preschools, elementary and junior high schools, as well as institutions for the mentally handicapped. The game I advocate is the capture version of Go, which does not involve complicated rules. In fact, anyone can enjoy the game by understanding a single, simple rule.

I've experienced amazing results. I have seen children and adults alike regain the sparkle in their eyes. The episode of the old man is but one example of unexpected results. I have often heard others call these miracles, but I would say that each of us has a great inherent power that is brought out through playing Go. At the same time, I am certain of the great potential contained within the game of Go.

Anyone can learn and enjoy playing Capture Go, since the game transcends age differences, disabilities, and language barriers. While communicating with others around the board, or when a group of players becomes united as one while playing a team game, we find ourselves enjoying interacting with others, leaving social status behind. In the process of considering the next move and discovering the right answer on our own, we realize our own great potential.

The Go program I initiated has spread throughout Japan and to schools and institutions abroad. During that time, I have reflected on the meaning of communication and interaction through Capture Go, and I have had so many moving experiences that I hoped I would one day be able to share with as many people as possible. I will be very happy if we can share the pleasure of Go through this book.

001Part One: The Impact of Playing Go

001 The Beginning— A Kindergarten in Shonai

024 A Class of Special Needs Children

027 Exchanges at a Day Care Center for the Elderly

035Part Two: How to Create a Go Program

036 How to Teach Kindergarten Children

042 How to Teach Elementary School Children

043 How to Teach Junior High and High School Students

043 How to Teach Go in Institutions

047Part Three: The Program Expands Around the World

047 The First Go Programs Overseas -in the Netherlands

064 We Are All Alike Human Beings