The store will not work correctly in the case when cookies are disabled.
Article Number
SCOMARTAOTCK
Author
Andrew Martin

The ABC of the Caro Kann 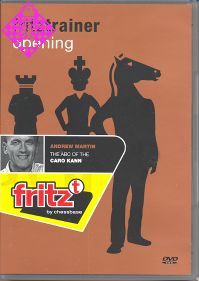 Mentioned by Polerio as early as 1590, it was Horatious Caro of Berlin and Markus Kann of Vienna who introduced 1...c6 into competitive play all the way back in the second half of the nineteenth century. At that time, swashbuckling attacking play usually connected with gambits was very popular and so it was hardly surprising that this defence was regarded as dry and boring.

After Steinitz,when defensive principles began to be more fully appreciated, we saw an upsurge of interest in defences such as the Caro-Kann and it was no less a figure than Jose-Raul Capablanca who would use our defence as one of the main weapons in his armoury. It suited his outstanding positional style very well. Later adherants included Flohr, Nimzowitsch, Tartakower, Botvinnik, Smyslov, Petrosian, Karpov, Leko and Kramnik. Here we see a definite trend among fierce competitors of a similar inclination. Solidity above all, but solidity with promise !

On a basic level Black is trying to gain a firm central foothold. Unlike the French Defence he does not block in his Bishop on c8.Thus the Caro-Kann offers fluent development. Black is uncommitted to any particular pawn structure and he has a safe King. On a practical level the ideas of the Caro-Kann are relatively easy to understand and therefore eminently suited to the competitive player. Black steers a safe course around open play. However,possible disadvantages of the defence should always be kept in mind. Black rarely threatens White directly with this opening and so White often tends to get the initiative. White also has free development and slightly more space . He will commonly have an extra central pawn. Nevertheless practice at all levels has shown that Black can defend. and often hit back with interest!

The ABC of the Caro Kann describes a repertoire for Black which will stand the test of time and the main ideas and themes of the opening are explained in Andrew Martin's usual friendly, accessable style. The Caro-Kann is a permanent defence to 1 e4! Video running time: 4 h 13 min.

Andrew Martin is 49 years old and lives in Sandhurst,England. He is an International Master who has authored several best-selling DVD's for Chessbase. He is the current World Simultanoeus Display record holder as catalogued in the 2006 edition of the Guinness Book of Records.