The store will not work correctly in the case when cookies are disabled.
Article Number
SCODAVTA
Author
Nigel Davies 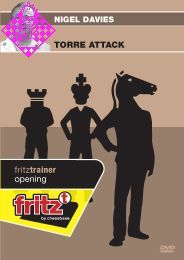 By Torre Attack, with 1.d4 followed by 2.Nf3 and 3.Bg5, is a solid and easy to learn opening system with hidden dynamic potential. An understanding of the plans and ideas is more important than a precise knowledge of variations which means that it can be played for a lifetime without the need to worry about shock moves or surprises. These are amongst the reasons that several great players have been attracted by the Torre, including those with such diverse styles as Tigran Petrosian and David Bronstein.

On this DVD Davies explains the plans and ideas, showing how White should react to Black's different set-ups using 21 illustrative games. Armed with this material theviewer will be able to weild the Torre Attack with confidence and success. Video running time: 4 hours.

Nigel Davies has been a Grandmaster since 1993 and is a former British Open Quickplay and U21 Champion. He has played the Torre Attack in a number of his own games.