The store will not work correctly in the case when cookies are disabled.
Article Number
SCOSHIMBGITSVE
Author
Alexei Shirov

Shirov, My Best Games in the Sveshnikov 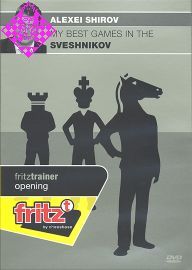 The Sveshnikov Variation of the Sicilian Defence is considered one of the most promising replies to 1.e4, often giving rise to sharp and complex positions which require precise and inventive play from both sides. Thus, an opening tailor-made for Alexei Shirov (FIDE World Cup finalist in 2007), who has included it into his repertoire with both White and Black and knows the mutual tricks and traps all too well. In more than four hours of video, the genius from Latvia presents and explains his best Sveshnikov games, from his first successes in 1992 until his latest achievements in the year 2007. The spectator is shown

typical opening plans for both sides, receives explanations on strategy and tactics in the middlegame and learns how to convert obtained advantages in the endgame – and all this in a most entertaining way. A masterful course on one of the most popular opening of our times by one of the best players of our times. Video running time: 4 hours.

Alexei Shirov was born in Riga just like world champion Mihail Tal, and also his playing style reminds many chess fans of the young Tal. In the beginning of the 90ies, a comet-like rise brought the young Latvian to the world top within the shortest of time. Being no older than 22 years, he already had an Elo rating of nearly 2750 and belonged to the absolute elite. Since then Shirov has been one of the best players in the world, delighting all chess fans with original and amazing ideas on the board.