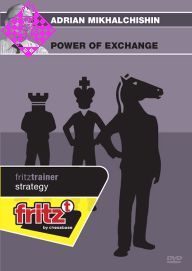 Thecorrect technique of exchanging is the most important ability of Grandmasters! Which pieces to swap and which pieces to keep, whether to recapture with a piece or with a pawn, these are questions which every player of every level has to answer many times during a single game. And the greatest difference between GMs and amateurs is not in opening knowledge or in calculation power, but in this simple technique. The great Botvinnik even said that chess is just multiple exchanges. He explained Fischer's technique of play: He had never bad pieces - he always exchanged them for his opponent's strong pieces. Video running time: 3 hrs. Adrian Mikhalchishin, a Grandmaster since 1978, is currently among the top 5 worldtrainers and the Chairman of the FIDE Trainers' Commission. He trained the team of USSR in 1980's, national teams of Slovenia, Poland and the Netherlands, and was the trainer of Anatoly Karpov (1980-1986), trained Zsuzsa Polgar, Alexander Beliavsky, Maja Chiburdanidze, Arkadij Naiditsch and Vassily Ivanchuk.