The store will not work correctly in the case when cookies are disabled.
Article Number
LXYUSBYC1
Author
Artur Yusupov 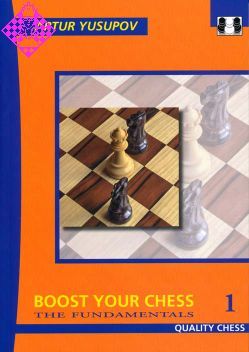 BOOST YOUR CHESS 1 continues Artur Yusupov’s Fundamentals series, helping players to build their skills on solid foundations. Yusupov guides the reader towards a higher level of chess understanding using carefully selected positions and advice. This new understanding is then tested by a series of puzzles.

Artur Yusupov was ranked No. 3 in the world from 1986 to 1992, just behind the legendary Karpov and Kasparov. He has won everything there is to win in chess except for the World Championship. In recent years he has mainly worked as a chess trainer with players ranging from current World Champion Anand to local amateurs in Germany, where he resides.

Winner of the 2009 Boleslavsky Medal from FIDE (the World Chess Federation) as the best instructional chess books in the world (ahead of Garry Kasparov and Mark Dvoretsky in 2nd and 3rd place).

180 18 The principles behind mobilization

208 21 Combinations with the major pieces