The store will not work correctly in the case when cookies are disabled.
Article Number
SCODAV1D4R
Author
Nigel Davies 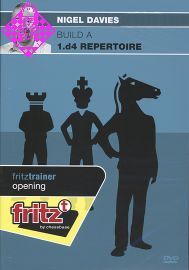 Creating an opening repertoire can be a difficult and demanding job, especially for those with limited study time. Attempts to implement a lot of new openings at the same time can set a player adrift in a sea of unknown chess patterns. This in turn can have a catastrophic impact on their game.

On this DVD Nigel Davies explains how to go about this process of building a reper­toire the right way, with a minimal amount of stress or sweeping wholesale changes. Instead of changing everything at once he proposes that you start out with a Queen's Pawn Opening such as the London System, Torre Attack or Colle System and then build on these openings step by step. After playing 1.d4 and 2.Nf3 you will gradu­ally introduce lines with 3.c4 whilst acquiring an understanding of the middle games this will lead to. Davies makes specific recommendations about which variations you should play and the order in which they should be introduced.

In the final stage of their repertoire development players may wish to switch to 1.d4 and 2.c4, but with the groundwork having been properly laid. At the end of the DVD Davies explains how to go about this and discusses some of the issues involved.