The store will not work correctly in the case when cookies are disabled.
Article Number
LXYUSBUYC1
Author
Artur Yusupov 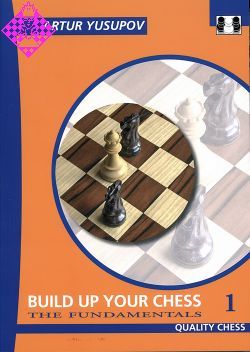 252 Index of composers and analysts

“Build Up Your Chess: The Fundamentals is the first in a series for players who want to build their skills on a solid foundation. In 24 chapters he sets out to cover the basics: simple tactics, openings, fundamental endgames, calculation of variations and the rudiments of positional chess. Each chapter starts with the introduction of a theme followed by progressively more difficult examples and finally exercises to solve with detailed solutions. Such an approach has been

seen before but never as well done. [...] This book will be very helpful for almost all players below 2200 who learned how to play chess outside the former Soviet Union. With very few exceptions such players have fundamental gaps in their knowledge. A player rated 2000 will likely whip through this book quite quickly but every so often they are going to find positions that they do not know the answer to. Better to learn at home what the positions are than over the board!