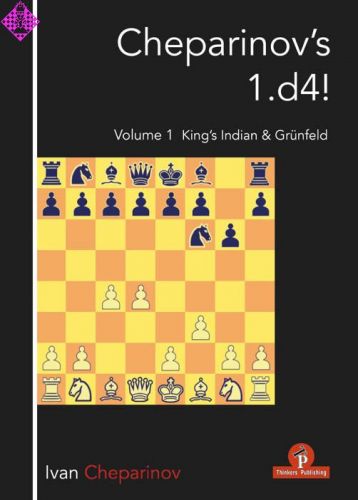 Ivan Cheparinov was born in Bulgaria on 26 November 1986. He learned to play chess at the age of five and progressed quickly, winning the Bulgarian Junior Championship in 2000 and becoming a grandmaster in 2004. He has finished first or equal first in many strong open and elite round-robin tournaments, such as Essent (2006), Morelia (2007), Sigeman & Co invitational (2007), Ruy Lopez Masters (2009 and 2010) and Gibraltar Chess Festival (2014).

Ivan won the national championship of Bulgaria four times (2004, 2005, 2012 and 2018) and tied for first at the European Individual Championship in 2007. After his results in 2007 he crossed the threshold of 2700 for the first time and has since been a regular member of the '2700+' club, with a current peak rating of 2718. He was a long-time second of ex-World Champion Veselin Topalov, also from Bulgaria.

This book marks the start of aseries of four on 1.d4 in which Ivan will share the secrets from two decades analyzing and playing it at the pinnacle of world chess. This volume in particular deals with two of the most popular replies Black can play after 1.d4: the King's Indian and Grünfeld. Ivan presents avantgarde theory with his personal refinements as weil as explanations of the deep strategical nuances that arise after his recommendations.