The store will not work correctly in the case when cookies are disabled.
Article Number
SCOBOLE1C4E5FB
Author
Victor Bologan 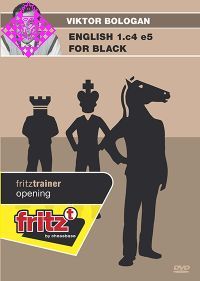 From the very beginning we are taught to play for the centre, to develop pieces, to keep our king safe. But as time passes the “must” rules lose their power, we allow exceptions more and more, until at some point we pick up our first chess manual and discover that we have to repeat the general principles from the very beginning. It is the same with openings. In order to confuse their opponents many strong players have nowadays started to play the English Opening 1.c4 with White, breaking the golden rule of occupying the centre on the very first move. Actually you already should understand from my preceding sentences that against1.c4 I have

prepared for you the classical move 1 ... e5. Some people may say that they are not ready to play the Sicilian with reversed colours and a tempo less. In the plan, which is very close to the spirit of the Rossolimo, with quiet positional play that tempo is not so important and meanwhile many ideas work just as perfectly as if we had White. Except for 3 ... d5, which deserves a separate DVD, I have tried to describe the main plans for

Black such as ...Bb4, ...Bc5 and even ...Nd4. Of course I didn’t miss out 2.Nc3 Bb4 which was for a long time played by Moldovan students of Chebanenko. Before starting to make this DVD I was

sure that Black had problems in this line, but to my surprise I found a way to equalise! Of course, I owe thanks to recent games played and strong computer analysis. So, play 1.c4 e5 since this corresponds to the main principle of chess! Occupy the centre!