The store will not work correctly in the case when cookies are disabled.
Article Number
LXWHYET185766
Author
Ken Whyld 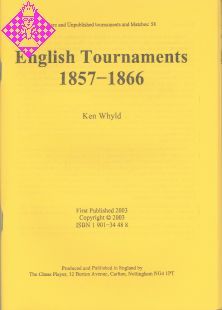 The British Chess Association, the child of the Northern and Midland Counties Chess Association, gradually evolved during the 1850s. Its first meeting was at Cheltenham 1855, but although various matches and other games were played, there was no tournament. The readers of the Chess Player^s Chronicle had to be satisfied with a five-page account of the dinner instead. With one exception the next events were very successful. This book contains accounts and all available games of three of them -Manchester 1857, Birmingham 1858, and Cambridge 1860. The next two, Bristol 1861 and London 1862, are to be found in existing tournament books. It is worth noting that Kolisch was seen, hi 1860, as the only European capable of matching Morphy. Indeed, after his return to USA, Morphy agreed to play a match with Kolisch, although he later changed his mind.

The other three events reported in this book were not connected with the BCA. The most important was the tournament at Manchester. Unlike others in this book, it was not played at a congress, but spread over several months. The winner was the mysterious Russian-born Pindar, who then challenged Stanley to a match, offering to give odds. This, considered an insult to the player regarded as the best in America before Morphy, was turned down, but Pindar did defeat the young Blackburne 5-0 shortly afterwards.

The two final events are minor, but are included because their details are hard to find. Leeds 1861 was a one-day meeting, but still managed to include an 8-player knockout. Newcastle-upon-Tyne 1866 was the subject of a printed report that is so scarce that it is not to be found in the British Library, nor hi the great chess libraries in Cleveland and The Hague. Fortunately I found von der Lasa's own copy in his library at Kornik Castle, near Poznan. All of the tournament games found in the report are included here. Although they are of a much lower level than those from the other events, they are interesting. It is rare to find examples of the average club player's games ofthat period.

In all of these knockouts a draw was a non-result, and the game replayed with the same player taking the white pieces. Because of this perspective, draws were often not mentioned in accounts of the matches.

Alan Smith of Manchester has helped greatly. He found several games, and has given wise advice in general. Eric Fisher of Hull rescued the report of the Leeds event.