The store will not work correctly in the case when cookies are disabled.
Article Number
LXLEWFGAC
Author
William LewisVlastimil Fiala 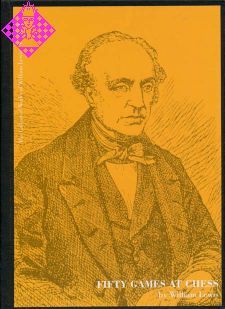 William Lewis (1787-1870) was one of the leading English chess players and chess authors in the first half of the 19th century. His chess career is closely linked in particular with the second and their decades, when he was among the strongest players in Europe. Kenneth Whyld says that "he learned much of his chess from Sarratt. Around 1819 he was operator of the Turk, chess mechanical machine, meeting all-comers successfully. With Cochrane he visited Paris in 1821 and, receiving odds of pawn and move from Deschapelles, defeated him in a short match (+1=2). In 1825 Bourdonnais visited England. Lewis recalled that they played about 70 games, and according to Walker seven of them constituted a match which Lewis lost (+2-5)....

"With no significant playing achievement to his credit Lewis acquired such a high reputation that a correspondent writing to the weekly magazine Bell's Life in 1838 was moved to call him grandmaster. From 1925 he preserved this reputation by the simplest means: he declined to play on even terms. In the same year he opened a club where he gave lessons. Walker and MacDonell were among his pupils."

William Lewis was in his day one of the most diligent chess writers. In 1817-1842 (when counting the first editions only) he published 17 books on chess. Many of them were reprinted still while he was alive (the last one in 1844), and yet Douglas A. Betts, author of the ,,Chess. An Annotated Bibliography of Works Published in the English Language 1850-1968" (reprint Olomouc 2005) mentions after 1850 no reprint of any chess publication by Lewis.

For this reason, the Publishing House Moravian Chess decided to present the legacy of this great English players and author and prepared for subscribers a limited numbered (100 copies) under the general title ,,Collected Works of William Lewis" which will include the following titles:

LEWIS, William: Oriental Chess, or Specimens of Hindoostanee excellence in that celebrated game, exhibited in more than seventy situations, originally published in India, and remarkable for their unparalleled skill and ingenuity: to which are added numerous original situations, together with selections from the best European authors.

Stamma on the game of chess: containing numerous openings of games, and one hundred critical situations, illustrated on coloured diagrams. New and improved edition/with notes and remarks by William Lewis/

Gioachino Greco on the game of chess /translated from the French; to which are added, numerous remarks, critical and explanatory, by William Lewis, author and editor of several works on chess./

LEWIS, William: Elements of the game of chess, or, A new methods of attack & defence in the king's gambit, selected from the works of Greco, Salvio, Muzio, Philidor, the anonymous Modenese, Lolli, with notes: also a new and extremely original defence of the king's gambit. CARRERA, Pietro: A Treatise on the game of chess, containing games at odds, various openings of even games, different methods of winning and drawing the game, also, numerous critical situations on diagrams: to which are added, the art of playing without seeing the board, and an account of the most celebrated chess players of his time/first published in 1617 by Pietro Carrera; translated from the Italian, with additional notes and remarks, by William Lewis.

SARRAT, Jacob Henry: A treatise on the game of chess containing a regular system of attack and defence, also numerous rules and examples, teaching the most approved method of playing pawns at the end of a game: to which is added a selection of critical and remarkable situations won or drawn by scientific moves. New edition, revised and improved /with additional notes and remarks by W. Lewis./

LEWIS, William: First and second games of the match at chess now pending between the London and Edinburgh Chess Clubs with numerous variations and remarks by W. Lewis./

LEWIS, William: Chess Problems: being a selection of original positions, to which are added others extracted from rare and valuable works, forming together one hundred ends of games, won or drawn by brilliant and scientific moves: to which are added the names of the authors by W. Lewis, teacher of chess.

1828 The games of the match at chess played by the London and the Edinburgh Chess Clubs between the years 1824 and 1828 with numerous variations and remarks by W. Lewis.

LEWIS, William: Remarks on the report of the Committee of the Edinburgh Chess Club, containing the games of the match at chess played between the London and Edinburg Chess Club [sic.].

LEWIS, William: A series of progressive lessons on the game of chess, containing numerous general rules and remarks: also, the most approved method of beginning the game exemplified in five openings, with reasons for every move /the whole written for the use of beginners by W. Lewis./

LEWIS, William: Fifty Games at chess which have actually been played, most of which occurred between the author and some of the best players in England, France and Germany: to which is added some account of the village of Stroebeck, in Germany, with three games played according to the method practised there.

LEWIS, William: A second series of lessons on the game of chess, containing several new methods of attack and defence for the use of the higher class of players: to which is added, fifty games at chess actually played, many of which occurred between the author and some of the best players in France and Germany: also, and account of the village of Stroebeck, in Germany.

LEWIS, William: Chess for beginners, in a series of progressive lessons: showing the most approved methods of beginning and ending the game, with various situations and checkmates, illustrated by numerous diagrams, printed in colours.

LEWIS, William: A selection of games at chess, played at the Westminster Chess Club between Monsieur L. C. de la Bourdonnais and an English amateur of first rate skill /arranged, with remarks, by W. Lewis/

LEWIS, William: Chess-board companion: containing the laws of the game, the value and powers of the pieces, remarks on the most approved methods of beginning the game, with numerous examples, &c., written expressly for the use of beginners: to which are added, several instructive problems on diagrams.

LEWIS, William: Treatise on the game of chess: containing an introduction to the game, and an analysis of the various openings of games, with several new modes of attack and defence: to which are added, twenty-five new chess problems on diagrams.

The "Collected Works of William Lewis" will contain not only the reprints of his books on chess but also a transcript of the as yet lost Lewis' Chess Manuscript from 1813-1840, "...its publication," according to H. J. R. Murray, "...would undoubtedly throw great light upon a period in the history of English chess...". The rediscovered Lewis manuscript contains many still unknown games by Lewis, as well as many other foremost British and French players from the first half of the 19 th century. Moreover, Vlastimil Fiala, the editor of the Quarterly for Chess History is preparing the book "Chess Career of William Lewis," in which he will try to collect all known as well as unknown chess games by W. Lewis.

All these books will be in a luxury rendering, printed on versatile business paper (brilliant hammer sheets) in 50 copies and will have a special hand-made binding. In addition to this luxury edition there will be another 100 copies, unnumbered, in the current form, intended for a wider circle of readers.

All these numbered publications will be sold only through the Publishing House Moravian Chess. Because of the limited number we open a subscription (orders with no advance payment) for each volume and we guarantee the number of the copy from the lower to the higher, according to the sequence of the orders.