The store will not work correctly in the case when cookies are disabled.
Article Number
LODEMFTAKI
Author
Yelena Dembo 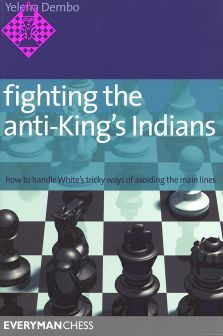 " I love playing the King's Indian, but no-one ever allows me to reach my favourite opening! " Does this sound like an all too familiar complaint? The answer to this problem lies here. The truth is you will reach your favourite opening in barely half the games you play against 1 d4, and that's why this book is a godsend to those players fed up with blindly searching for the right way to play against these annoying White systems designed to avoid the main lines: the Trompowsky; the London System; the Torre Attack; the Barry Attack; the Colle System; the Veresov; the Blackmar-Diemer Gambit - the list goes on and on! Yelena Dembo, who as a hardened King's Indian and Grünfeld player has considerable experience facing these irritating openings, deals with them in no uncertain terms, in each case offering Black a no-nonsense solution that enables you to face the future with confidence.

Yelena Dembo is an International Master from Greece with numerous tournament successes to her name, including the bronze medal at the 2005 European Women's Championship and one Grandmaster norm. She's a renowned chess coach, who has taught students from over 30 countries. She's also an experienced chess writer and a regular contributor to the quality publication Chess Informant . This is her second book for Everyman Chess, a follow-up to Play the Grünfeld .

The King's Indian and the Grünfeld are two of Black's most dynamic and combat­ive defences to 1 d4. Nowadays one needs to be armed with a lot of complex the­ory in order to successfully tackle them and even then success is not guaranteed. Thus it is not surprising that many white players, especially at lower and amateur levels, often deviate from the main paths after 1 d4 Nf6, preferring to omit an early c2-c4 and to avoid the King's Indian and the Grünfeld altogether.

This book aims to provide the reader with a complete, well-researched and sound repertoire against all these anti-King's Indian and anti-Grünfeld systems. More specifically, it covers all the established opening set-ups White can employ after 1 d4 Nf6, provided that he refrains from playing c4 at an early stage - that would transpose back to our beloved openings! In addition, you will find at the end a couple of chapters discussing move order issues relating to the English Opening. While this material is strictly outside the range of the anti-King's Indi­ans, it is of such great practical significance to King's Indian and Grünfeld players that I felt I had to give it the attention it deserves.

I must admit that the title of this book is not entirely accurate! That's because some Benoni and Benko players like to meet 1 d4 Nf6 2 Nf3 with 2...g6 and so may find our coverage of some use. Moreover, all players who employ 1 d4 Nf6 have to encounter both the Trompowsky and the Veresov; two openings which I have devoted a fair amount of coverage to.

I have decided to categorize White's anti-King's Indian approaches into four main categories:

i. White pursues an independent approach on move 2, especially with the Veresov and the popular Trompowsky. Both of these systems contain a fair amount of danger for the unwary, but White makes certain concessions along the way and Black can gain a good game by countering them head on!

ii. Solid set-ups characterized by an early e3, namely the infamous London, Torre and Colle trio. I am sure that many of you who play your chess away from the elite world of Linares and Wijk aan Zee have faced these options all too often. They are not without practical bite, but as I aim to show, Black can obtain a decent game by knowing exactly where to place his pieces and which plans to pursue. Please note that White can also employ an aggressive version of the London Sys­tem in the Barry Attack, but this can be met with a concrete and strong sequence.

iii. White fianchettoes his king's bishop on g2. These solid systems have great transpositional significance and therefore I have provided separate coverage for both King's Indian and Grünfeld players.

iv. Move order issues which arise after both 1 c4 and 1 Nf3. These approaches see White aiming to avoid the Grünfeld, but they fail to inconvenience the King's Indian player. Chapter 11 discusses these problems for the Grünfeld player, before I move on in Chapter 12 to examining how to handle a King's Indian set-up when­ever White plays c4 but not also d4.

Researching and writing this book has been a rewarding process. I have be­come better acquainted with many of the openings examined and must admit that my knowledge of them has greatly improved. Indeed, I now look forward to en­countering the likes of the Trompowsky and the Torre in my own games, and hope that you will too after studying this work!

A book may only have the author's name on the cover, but it is almost never a one (wo)man product. It would be improper not to express my gratitude to all those writers whose coverage of lines in this book I have found especially inspir­ing: Joe Gallagher, Peter Wells and Eric Prie. I would also like to thank John Emms at Everyman Chess for all his faith, help and precious assistance. And last but not least, Richard Palliser, who succeeded in the Herculean task of turning a chaotic manuscript into the nice book which you are now holding, as well as offering his help and advice whenever needed!

131 7 A Kingside Fianchetto vs. the King's Indian

153 8 A Kingside Fianchetto vs. the Grünfeld