The store will not work correctly in the case when cookies are disabled.
Article Number
LXGRAMBGAC
Author
Joseph Henry BlackburneP. Anderson Graham 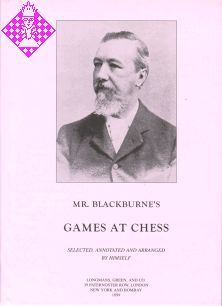 The aim of this work is twofold. In the first place it is a collection of the best games of a very brilliant and interest­ing English Chess player; in the second, it is hoped that it may be found of much use as a manual for Chess players. Everybody knows what a wearisome thing it is to learn Chess by means of the old system of analysis with its endless variations and back games. A pleasanter and quicker method is by playing over the games of a master, and Mr. Blackburne has unique advantages for this purpose. For nearly forty years he has held the foremost place in English Chess, and there is scarcely a tournament between that held in London in 1862 and that in 1899 wherein he has not been a prominent figure—der Schwarze Tod der Schachspieler, as he was named in the Deutschen Zeitung a quarter of a century ago. His match games, arranged in openings and by date, form in themselves a history of Chess moves, and will not only show the student how to play, but ut a glance explain to him why certain tactics have become old-fashioned and others have come into vogue.

During a great part of the same period it has been Mr. Blackburne's custom to make annual pilgrimages through England, Wales, Scotland and Ireland, engaging the members of provincial clubs in simultaneous and blindfold play. It may be most confidently assumed that the games preserved from these engagements will at once delight and instruct the student. Except in a few cases where the endings have, a special interest, only well-played games have been admitted; and, as Mr. Black­burne's genius for the game has always found its best expression on these occasions, the weak but plausible moves which pass current for years have their inadequacy demonstrated here in the most effectual and brilliant fashion. Next to actual practice with a great master it is impossible to imagine anything more likely to improve play than going over these games, teeming as they are with ideas capable of constant application. For it may be emphatically stated that this is not a book of theory but of practice, not a work of analysis but a record of achievement.

The book has a further claim to attention as presenting a picture of the Chess of the whole world during the time of the present generation. Examples from the games of every great master, from the day of Staunton to that of Pillsbury, will be found within its covers-examples, too, from nearly every land, and culled from many different languages. Nor is this all. There is scarcely a local club in the British Islands, scarcely a local champion who does not figure here, so that we cannot be wrong in saying that the book contains specimens of every extant style of play.

In all about 400 games are given, and they are divided into three classes— match, off-hand and blindfold games. To these is added a brief selection of problems that have a curious interest of their own, as showing how much the delicate art of problem-composition has changed during the last thirty or forty years. It has now come to be quite a separate department of chess.

A word of advice may be added for the benefit of the young student who wishes to improve his play by a study of these games. As has been already said, this is a book of ideas, and what the student should do is to try and seize hold of the prin­ciples. Perhaps the easiest way to explain is by illustration. At the corner of page 41 will be found a diagram showing White about to offer the sacrifice of his Queen. It is a beautiful position, but the idea of the combination may be traced back to Legal, even though it is not identical with Legal's famous mate. But the principle must have been in Mr. Blackburne's head when he offered his Queen to Dr. Zukertort. So, likewise, the careful student will find that several very brilliant combinations bear resemblance enough to positions in Morphy to show what help had been gained from a study of that master. This shows the advantage of acquiring ideas.

Again, the worst of analytical books is that they do not demonstrate the weakness of bad moves. But let any one play through the match games in an opening and then follow the off-hand and blindfold games in it, and in the end it will be the fault of his own intelligence if he be not thoroughly familiar alike with its strong and its weak points-he will at once see where traps are laid for his own feet, and also learn how to take full advantage of any stumble on the part of his opponent.

The games are arranged by date, chiefly for the convenience of those who are interested in studying the development of modern play, which has undergone very important changes since the date on which Mr. Blackburne first entered the arena.

052 (III.) The Scotch Gambit and the Scotch Opening

067 (V.) The Giuoco Piano, Evans Gambit, and their branches