The store will not work correctly in the case when cookies are disabled.
Article Number
LXGILODE1960
Author
Anthony J. Gillam 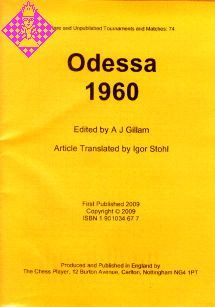 The games of this tournament were found in a bound notebook where they were written in pencil in Latvian. Seven games were missing which were supplied on a separate sheet, also in Latvian, apparently signed by Gipslis.

The book contains the 146 games, a cross table, progressive score table and a table giving the game number for each pairing. Before each round there is a list of the pairings with results, followed by the scores at the end of the round for each player. All of that material is reproduced here, as is the list of competitors.

On the reverse of the title page is the following paragraph:

"Games received from the central chess club of the Latvian Soviet Socialist Republic, with permission of its director, comrade Z. Solmanis. Missing games received from master A. Gipslis, who copied them in Moscow and sent them by post. (When there was the return match between Tals and Botvinniks, he was in Moscow). The games were probably copied by Garkunovs, but one cannot rely on his accuracy."