The store will not work correctly in the case when cookies are disabled.
Article Number
LOHANPTO1B4
Author
Carsten Hansen

Play the Orangutan: 1.b4

From the series »Opening Hacker Files« 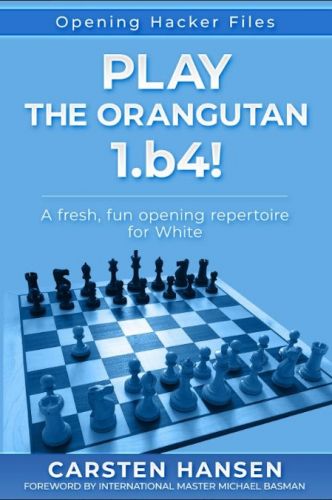 How did the author take a supposedly harmless, and eccentric opening and score 70% in his games with it, including a massive 75% against grandmasters?

He started playing the Orangutan and went from Orangutan-curious to Orangutan-devotee in a few months and as he explored the opening further, the results got better and better!

In this book, the author delivers a complete repertoire starting with 1.b4, a repertoire that will challenge Black to:

Through the author's work, the opening has been infused with numerous new ideas and concepts as well as countless improvements over existing theory and guidance on how to deal with Black's most common attempts at a refutation.

The Orangutan, 1.b4, is also known as the Sokolsky opening, respectively named by the endearing name given to the opening by grandmaster SaviellyTartakower in 1924 after a visit to the New York Central Park Zoo or the opening's primary researcher and practitioner, Alexei Sokolsky. The opening challenges normal conventions by launching an instant attack on Black's queenside right from the outset of the game and leads to an interesting game where both players are challenged to play creatively right from outset.

This book by experienced chess author Carsten Hansen presents a repertoire for White to help navigate Black's many tricky alternatives and lead White to a position of playing for the win.