The store will not work correctly in the case when cookies are disabled.
Article Number
LOBAUPTSG
Author
Christian Bauer 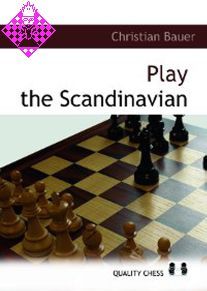 After one move of the Scandinavian opening, 1.e4 d5, Black decides where the battle will be fought - a significant gain for any competitive player. Grandmaster Christian Bauer is one of the world’s leading experts on the Scandinavian and in this book he reveals the secrets of his over-the-board success. Bauer focuses particularly on 2.exd5 Qxd5 3.Nc3 Qa5, the established main line of the Scandinavian. An understanding of the move order nuances is essential, and Bauer is an ideally-qualified guide.

GM Christian Bauer is a strong grandmaster from France. This is his 3 rd book. He has a certain preference for slightly unorthodox openings and has previously written high quality books on 1 ... b6 and the Philidor Defence. He plays the Scandinavian regularly with black with excellent results.

In this book GM Bauer presents his own Skandinavian repertoire. He interprets this opening in a rather classical way and only considers after 1.e4 d5 2.exd5 Dxd5 3.Sc3 the move 3 ... Da5 (3 ... Dd6 is very fashionable now). His main line runs 4.d4 Sf6 5.Nf3 Lf5 6.Bc4 e6 7.Ld2 c6. The American GM Nakamura and the women ex-World Champion Alexandra Kosteniuk have been playing this line recently , getting good positions out of the opening and achieving excellent practical results. Here GM Bauer analyses all possible continuations for white in great detail. Also efforts to trick Black by choosing a different move order e.g. 5.Ld2, after which 5 ... Lg4 is interesting, are covered thoroughly. Apart from deep analysis of the mainlines, a strong point of this book is that GM Bauer has put in a special effort on finding ways for black to deviate to less trodden paths, e.g. by playing 4 ... Lg4 or even 4 ... Lf5 5.Lc4 e6 with the idea to play after 5.Sf3 a setup involving the original ... Se7!?. He also presents analysis of lines that he considers from a theoretical point of view to be slightly dubious for black although in a practical game one could give them a try like 5 ... Sc6?! and 5 ... Se4?!. One of the advantages of the Skandinavian is that it is a rather simple opening, mainly because the same pawn structure arises in almost all the lines and black´s plans are also rather similar.

GM Bauer manages to present a very detailed and thorough coverage of the Skandinavian in his book. He more or less covers every sensible try for white after 1.e4 d5 and also gives black ample possibilities to deviate to unexplored paths. In the hands of an attentive reader of this book, the Skandinavian will be a sound and reliable opening with ample practical chances.

A very good book, which leaves nothing to be desired when it comes to the depth of the coverage of the chosen line and amount of original analysis. The practical aspect of chess is also by no means neglected.

I can recommend this book to players that are looking for a straight forward line to play against 1.e4, where there is not too much theory to be learned. After carefully going through the high quality analysis of GM Bauer an attentive reader will know what he needs to do and what he should avoid and be very much up to date on the opening theory and fit to play the Skandinavian on all levels.

Play the Skandinavian gets 4,5 stars out of 5. The only improvement that I see is that GM Bauer could here and there provide slightly more detailed analysis of Black´s attempts to go off the well trodden path. Admittedly there are not many practical games in these lines and going to an unexplored territory also has its charm.