The store will not work correctly in the case when cookies are disabled.
Article Number
SCLUD3E
Author
Matthias Wüllenweber 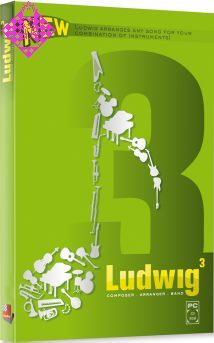 Ludwig makes music. Ludwig helps you compose. Ludwig arranges music for bands. Everything is simple with Ludwig: enter the melody, choose the form, the emotion and the style of music. Ludwig does all the rest: the chords, the accompaniment, the choice of instruments, the arrangement, the groove. You are the creative one, the software does the donkey work. Whether a beginner or a pro, anyone can compose complete songs with Ludwig. A few clicks and the song will be arranged for your own band. Or listen to classics in a fresh new style: with the help of Ludwig you can arrange well-known songs in a new way! Or perhaps you want to learn to play a new musical instrument? Or to learn how to improvise? It's all dead simple with Ludwig. Making music is even more fun with Ludwig!

What Ludwig 3 can do: