From the series »Empire Chess« 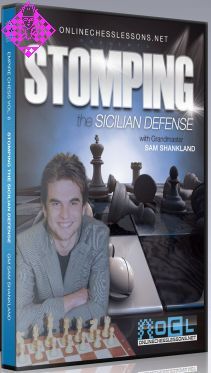 In this DVD series, we will review seven carefully chosen games in which white mounted a successful attack against the Sicilian Defense. The critical theme that ties all the games together is that white is best advised to develop his pieces to active squares and create a sound, harmonious position that limits counterplay before launching the trademark pawn storm to break down the defenses to the black king. While opening theory is not the main subject of the series, the seven games come from many different Sicilians, most prominently the Dragon, Taimanov, Sveshnikov, and Najdorf variations. All of the chosen games are discussed in their entirety, and all of them were played by world class players. It is my hope that this series will give the aspiring 1. e4 player knowledge, experience, and inspiration in tackling the most complex of all opening systems.

Sam Shankland is one of the world’s leading experts on the Sicilian Defense, having played this highly complicated opening for many years with both the white and black pieces. Shankland achieved the IM title by tying for 1st at the 2008 World U-18 Championship, and proceed to win the 2010 USA Junior Championship on tiebreaks ahead of Ray Robson and Parker Zhao. Shankland earned the Grandmaster title in 2011 after winning his 3rd GM norm the Berkeley Invitational that same year, firmly establishing himself as an elite player at the age of 20 years old!