The store will not work correctly in the case when cookies are disabled.
Article Number
SCODAVTF4S
Author
Nigel Davies 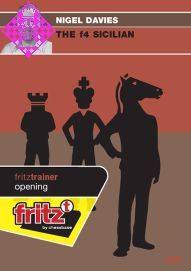 The f4 Sicilian is a perennial favorite with club players. It was popularised by Bent Larsen in the 1960s and then later on by British GMs such as Mark Hebden, James Plaskett and William Watson. White's strategy is simple, the advance of his e- and f-pawns gains space on the kingside and might later be used as abattering ram behind which White's pieces are ready to spring into the attack. Although this plan may sound primitive it can be highly effective. Indeed the Israeli GM Emil Sutovsky has used it to wreak havoc against some of the World's top players.

On this DVD Davies makes a cogent argument for White playing 2.Nc3 rather than 2.f4 because of the gambit line with 2...d5! 3.exd5 Nf6. He goes on to show that this is not only a playable approach for White but can have devastating consequences against anything but the most accurate play by Black. Accordingly Davies's presentation is offered for both players wishing to play this opening with White and for those who need to know how to meet it with Black. A special warning is offered to Najdorf players because 2.Nc3 d6 makes 3.f4 very dangerous.

Nigel Davies has been an International Grandmaster since 1993 and is a former British Open Quickplay and U21 Champion. He has had considerable experience in both the Scotch and in teaching club level players.