The store will not work correctly in the case when cookies are disabled.
Article Number
LMMARWPPITID
Author
Henrique Marinho 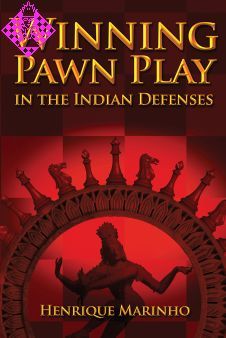 The King's Indian and Benoni defenses may look similar, but they lead to vastly different strategies for each player. Why does White usually attack on the queenside in the King's Indian but on the kingside in the Benoni, while Black does the opposite? Do you know when and where to launch your pawns forward, and when to rely on piece play? Can you stop your opponent from blocking up the position? Are you mystified by the subtle differences that totally change the game?

In Winning Pawn Play in the Indian Defenses, Henrique Marinho provides the guideposts that you need to make your way through the forest of strategies and variations in these popular modern openings. Aron Nimzowitsch's neglected idea of the "qualitative pawn majority" serves as the basic compass in the author's systematic exploration of the plans available to both White and Black, showing how typical Indian pawn formations suggest each player's strategic opportunities ... and the consequences of ignoring what the pawn structure tells you.

Fundamental positional lessons can get lost in the trees of variations. Marinho avoids exhausting tactical analysis and keeps a laserlike focus on ideas, structures, and plans in the nearly two hundred illustrative tournament games presented here, supplemented by the novel use of 20 chess engine games to investigate alternative plans in critical positions. You will learn not only to play either side of the king's fianchetto Indian defenses, but also to apply the tool of the qualitative majority to any opening you play or face.

Includes a glossary of terms and an appendix applying these ideas to the most important open game, the Ruy López.

Dr. Marinho is a former finalist in the Brazilian Championship, vice-champion of Southern Brazil, and champion of the city of Campinas (Sao Paulo), as well as co-founder of the Brazilian Academy of Chess and Culture.

011 The Qualitative Majority in Nimzowitsch's Career

PART I
025 General Theory of the Qualitative Majority

PART V
162 The Sä misch in the King's Indian Structure