The store will not work correctly in the case when cookies are disabled.
Article Number
LGMASAJISOTOOG
Author
Shirakawa Masayoshi

A Journey in Search of the Origins of Go 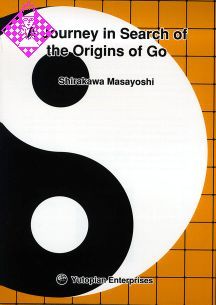 Having a naturally argumentative and logical disposition, I vaguely felt that there was some hidden world (logic or philosophy) behind go when I learned to play it from my father as a child. Later, as I gradually became acquainted with the philosophical issues of the game, I recklessly began to trace its history to its source. Since 1985 I have joined in several go expeditions to China, and, through these trips, I was able to advance my research. Finally, I hypothesized that the first pattern of the go board was Xuanshi zhengqi, described as a tool for divination in the great Chinese history books Historical Records in the closing years of the Shang Dynasty (11th Century B.C.). It was around the same time that Book of Changes (Yi Jing, also known in the West as I Ching), a textbook for divi­nation and one of the five Confucian classics, was completed, so I could make a reasonable relationship between go, divination in ancient Chinese philosophy, and the Five Elements. I append a chronological list at the end of this book which summarizes my research, but this is still a hypothesis and I look to the public for comments and criticisms.

As a whole this book is a record of the cultural exchanges through go between Japan and China. In the first chapter "Go and Three Kingdoms, " I explain how go is related to classical literature of China. The third chapter, "The Evolution of the Methods of Counting,' technically explains the mysterious Chinese rule of kirichin, where a player is penalized for the number of groups he has. This rule existed until the 18th century and is a point of contact between the Japanese and Chinese rules. It still remains in the Japanese rules as "stones that don't have two eyes die." This fact will provide a good starting point for the formulation of international rules that is expected to become a subject of discussion in the near future.