The store will not work correctly in the case when cookies are disabled.
Article Number
LXGILMUN1942
Author
Anthony J. Gillam 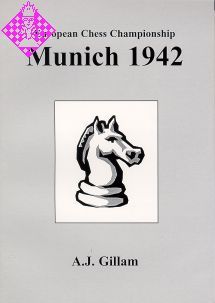 Two books have appeared to date on the first European Championships held in Munich in September 1942. They are: ,Europa-Schach-Rundschau: Band 1 Europameisterschaft Munchen 1942' by Alfred Brinckmann (probably published 1943). This was the first and only issue of the magazine of the Europaschachbund. Its 72 large pages contain 38 annotated games from the top group and 3 from the Wertungsturnier plus a theoretical article. ,A müncheni sakkmesterverseny Európa bajnokságáért 1942' (Kecskemet 1942) by Gideon Barcza. This small booklet contains 34 games from the top group and 15 from the second group, most of them with brief notes.

Both of these books are now very rare.

The remaining games of the top section were compiled from the three German magazines of the period - Deutsche Schachzeitung, Deutsche Schachblatter and Schach-Echo and we are fortunate that, between them, they failed to publish only part of one game.

The games of the second group (Wertungsturnier - Qualification Tournament) were, in the main, published in a small booklet by Erich Friebel, published (in Vienna?) in 1990! This booklet lacks the scores of five games; the others being given without annotations. A copy of this booklet was sent to me by Bernhard Suntrup, and Lothar Schmid was able to find one of the missing games in a manuscript by Diemer which is in his large library. My thanks to both of them.

I am also grateful to Andy Ansel for sending me a database of the games of the top group; to Judith Negyesi for translating several of Barcza's annotations and to Fred van der Vliet for supplying information on the Europaschachbund from his enormous chess database. Igor Stohl of Slovakia kindly translated the annotations to three of Rohacek's games from Slovensky Sach.

The annotations given here are from the two books quoted above, the magazines of the period and various biographical games collections. The articles which appear at the beginning of this book are taken from Brinckmann's work.

This tournament is fully deserving of a book. It is a great shame that it has taken nearly 60 years for one to appear.