The store will not work correctly in the case when cookies are disabled.
Article Number
LXFIACITUK
Author
Vlastimil Fiala

Capablanca in the United Kingdom 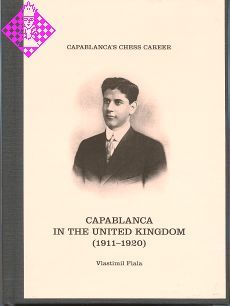 The first monograph mainly pays attention to the four sojourns of J. R. Capablanca to Great Britain in 1911, 1913, 1919 and 1920. J. R. Capablanca first thought of visiting the British Isles in 1910, but British chess players could meet him only shortly before the international tournament in San Sebastian in February, 1911, when he spent several days in London before his departure for Spain. The first chess exhibitions of the winner from San Sebastian took place only in November, 1911, when he played twice in London and once in Birmingham. His exhibition in the autumn of 1913 was not very large either when he played two simultaneous matches at the Chess Club of London and the Imperial Chess Club.

The stay in the British Isles in the second half of 1919 and in January, 1920, was an immense success. In August, 1919, he first attended the international chess tournament at Hastings and then went on a long tour of 36 simultaneous exhibitions in 28 English, Scottish, Welsh and Irish cities, achieving from the total of 1643 games the score of +1513-41=89. In the autumn of 1920, J. R. Capablanca again crossed the Atlantic to the Netherlands in order to discuss the final problems relating to the match for the world champion title with Emanuel Lasker. Then, in Britain, he would play two more simultaneous matches in Bristol and Woolwich.

This book is divided into five main parts describing all Capablanca's visits to and simultaneous exhibitions in the British Isles with a special chapter devoted to the international tournament at Hastings in August, 1919.

The monograph is based on a detailed study of the British chess magazines, Chess Amateur and British Chess Magazine, and, in particular, the regular chess columns and daily reporting in British newspapers. With his research, the author managed to document almost all of Capablanca's activities during this particular period in great detail. He also collected a large amount of completely unknown data and games of this master. As an example, in comparison with the Caparrós collection, which documented 69 games played in the British Isles in 1911-1920, the author of this monograph succeeded in discovering 123 games.

The author attempted to assemble not only the available information on Capablanca's activities and his existing games, but he used the majority of period analyses and commentaries from British chess columns and magazines. We will gratefully accept from our readers any reminders, corrections and additions referring to Capablanca's stay in the British Isles in 1911-1920.

378 Index of Simultaneous and Consultation Exhibitions